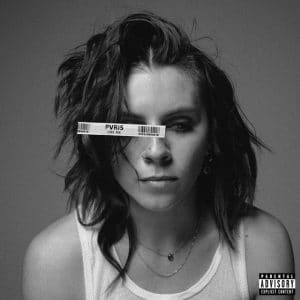 PVRIS, with Lynn Gunn now announced as the dominant architect of the group, has always been for relentless energy – halfway between embodying a fluorescent lit dance floor and the gloomy bottle of whisky behind the bar – but Use Me is by far the most streamlined and production-pristine of PVRIS’ work to date.

For the most part, this polished production emphasises the band’s bittersweet lyrics, with Gimme A Minute as one of the record’s standouts. Including rhythmically layered vocals, a chorus with an unabating pulse – that really clashes with the track title in the best way – and Gunn’s perfectly snarling vocals amplified in intensity by the punchy production, it is a electric opener which sounds unmistakably PVRIS, just with a fresh energy.

Tracks like Dead Weight and Hallucinations follow suit with vivacious flair – well-executed synth pop-rock track Dead Weight being a defiant force, whilst Hallucinations is at first a solemn ghost of a track, exploding into a chorus with an elevated, contemporary beat and seductive electric guitar, although the vocoder adds little depth. Albeit still alluring to listen to, some tracks on the album lack a similar passion – Good To Be Alive and Old Wounds are repetitive, with Good To Be Alive seeming to flicker between genres haphazardly. Similarly, the lyrics on this record can range between cutting and darkly witty to overdone: “It’s good to be alive, but I hate my life,” brings a stark, millennial vibe that is enjoyable, but a familiar indie refrain, whilst the track Use Me’s whole subject is slightly alarming, a rehashed Tove Lo’s Habits with none of the punch.

Yet elsewhere on the album, Gunn’s lyrics are strong: “Someone just ripped out my throat / Told me to sing while I was choked,” from Gimme A Minute is full of ingenuity, half a metaphor for the lack of fronting front woman Gunn has done up until this new album, and half a literal, evocative discussion of her vocal issues from the past. Stay Gold is equally as effervescent: “If you’re just the wind passing through I’d still be grateful”, ”You’ve seen my dark side, I left it on the table”, “Don’t wanna trap you in a song like all the others/ ‘Cause they’re dying off every night next to each other”, showing that PVRIS can craft quality lyrics as well as energetic production.

Sonically, there is little exploration out of PVRIS’s signature electronics, with the sultry glitter of Death Of Me, for example, being classic PVRIS – full of charm. Loveless is one of the exceptions, an acoustic swoon that we haven’t heard from the band before. Gunn’s vocals are so sincere in this track that it is hard not to feel as if you are in gut wrenching pain right alongside her, whilst January Rain is the calmest song we’ve yet heard from PVRIS.

Whilst Gimme A Minute is the standout of the more abrasively produced tracks on the album, January Rain may be PVRIS best in general – it doesn’t lose sight of PVRIS’ characteristically wicked synths, but is minimalist in comparison to the rest of the album, with the introspective lyrics being simultaneously poignant and stinging. This track strikes the perfect balance for PVRIS, hinting at a more subtle sonic path for PVRIS’ next record; perhaps with owing her music, Gunn also feels able to own her space with less of the galvanic synths. Let’s just hope PVRIS doesn’t leave them behind completely.

More on PVRIS
PVRIS – Use Me