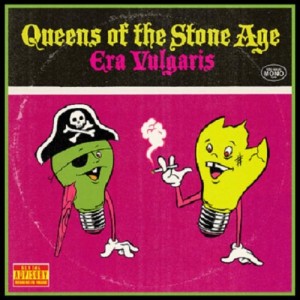 There’s no doubt, Queens Of The Stone Age rock. Era Vulgaris, rocks. It pounds and it struts and it rains deadly fire on those who dare question it. It’s the kind of album that’s happiest kicking down the door, spilling your pint, leering at your girlfriend and then pissing all over the pool table.

A typical QOTSA record then. But while it does all that you’d expect, it’s still a little bit disappointing. Why does it underwhelm so? Simply put, it’s a lack of cohesion.

Previous albums took a theme and ran with it: Rated R, wall-to-wall debauchery; Songs For The Deaf, the sound of a band road-tripping across Americana with nout but a broke-down radio and a trunk full of stimulants for company. Lullabies To Paralyze, well, that was Josh Homme as gothic alchemist; cackling atmospherically into his cauldron while a grainy copy of The Wicker Man looped endlessly in the background.

Era Vulgaris grabs a little of them all, never really managing to top any of them. It darts from the old, nicotine, Valium, Vicadin, marijuana, ecstasy and alcohol good-times of lead single Sick Sick Sick, thrusting like a Harrier jump jet leaving Julian Casblancas unintelligible in its cataclysmic wake, to Battery Acid, as frazzled and gloriously sunburnt as anything from Songs…., to the occult sludge of Run Pig Run, as malevolent and spooky as any of Lullabies worst nightmares, without ever really understanding why.

Individually, they kick arse. Together they jar. It’s a shame, because each of them develops momentum, it just happens to be momentum in opposing directions. Not that it isn’t fun. As with all QOTSA albums there’s a great deal of that to be had as they cave in your skull with another riff heavy enough to forge horseshoes on, but minus a consistency of purpose, it never properly floors you.

Still, even slightly unsure of what he actually is trying to do, Homme still wipes the floor with pretty much everyone else. Turning The Screw is a fuzzy chasm of a song, pulsing and convulsing like someone’s hooked it up to a defibrillator. The Desert Session surviving pseudo-funk of Make It Wit Chu is filthier than Har Mar Superstar wrestling Prince in a vat of custard, and the way Suture Up My Future slinks along in a way that makes you swear the bassline is actually winking at you, is little short of monumental.

However, I’m Designer isn’t as funny as it thinks, Running Joke treads the exact ground This Lullaby covered on the last record and Trent Reznor‘s input on the title track can’t prevent it from being the weakest thing here, the worrying sound of, gulp, the Queens treading water.

Although, The Queens treading water is still better than watching so many others horribly drowning. In the end, vulgar as it may seem, this common era has given us the very first average Queens Of The Stone Age album. Better than 87.4% of anything else released this month, but as an entry in their lofty canon, mediocre at best.