by Sam Shepherd
published: 30 May 2013 in Album Reviews
Tweet 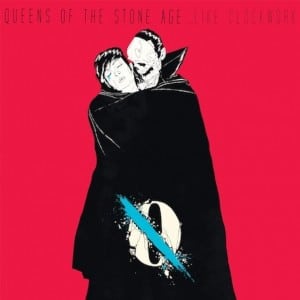 In the six years since Queens Of The Stone Age‘s last album the band had to negotiate some quite difficult waters, having faced line-up changes, problems in the studio, and countless other hindrances. But there’s a certain truth to the notion that once at the very bottom emotionally, there’s nowhere to go but up. To Josh Homme’s credit he’s faced the problems head on and, in so doing, seems to have stepped away from the sound that cemented QOTSA’s stoner reputation. This is the first step towards a reinvention.

Understandably, …Like Clockwork is a somewhat introspective affair; the bullheaded charges of drug fuelled exuberance such as Feel Good Hit Of The Summer are gone, and in their place are songs that possess emotional depth and, oddly, a distinct uncertainty. Musically, everything is reasonably assured, different perhaps, but solid. Lyrically, Homme’s at sea and full of doubt. The piano ballad of The Vampyre Of Time And Memory for example finds him stating “I want God to come and take me home, cos I’m alone in a crowd” and asking “does anyone ever get this right?”.

A smashed glass and the sinister throbbing bassline of Keep Your Eyes peeled introduces the album and, from the first note, it’s clear QOTSA inhabit a different world these days. A trawl through a mechanical nightmare, when Homme sings “if life is a dream, wake me up” it’s impossible not to wish for an alarm clock to ring. If things appear more chipper with I Sat By The Ocean, it’s superficial. With a riff that might have been ripped directly from Blur’s Coffee And TV, it plays a sleight of hand by sounding musically upbeat but delivering cold truths lyrically. “I sat by the ocean, and drank a potion baby, to erase you” is not the rumination of a happy man.

The driving rock of My God Is The Sun will please older fans of the band missing actual riffs, but its inclusion here threatens to disrupt the flow of the album. It suggests that Homme hasn’t quite made a clean break from the past just yet, but it is coming. Similarly, the guests on the album – Mark Lanegan, Nick Oliveri, Elton John – all hark back to the QOTSA’s policy of getting their mates round and a party going, but they’re so hidden in the mix that you’d scarcely know they were there. Even stand-in drummer Dave Grohl is distinctly restrained on the songs he performs on. The implication is that this is very much Homme’s album despite it being released under the Queens name.

Despite the distinct swerve in direction, there are still numerous killer blows to be found on …Like Clockwork. Sometimes they’re obvious, as on the tumultuous blues filth of If I Had A Tail, Homme’s David Bowie-like tones on Kalopsia, or the many changing moods of Fairweather Friends. Sometimes it’s a little less obvious, as on the title track, which finds Homme emoting beautifully in a falsetto over a plaintive piano.

It’s I Appear Missing that provides the most incredible moment on the album, if not the band’s career. A slow burning monument to messed up love, it’s a masterclass of cascading guitar, evocative vocals, and perfect pacing. The screaming solo that heads into the final build up is shot through with genuine feeling, supporting Homme as he croons “I never loved anything until I loved you”. It’s an encapsulation of an album that sees Queens Of The Stone Age at their most vulnerable. That they’ve not sounded this good in years suggests they’ve found strength in adversity.