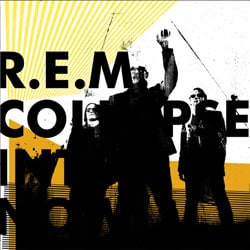 Collapse Into Now is R.E.M.’s 15th studio album, and their first since 2008’s Accelerate. While by no means a great album, Accelerate did at least re-establish R.E.M. as a relevant musical force after 2004’s dreary Around The Sun suggested the band might be sleepwalking into irrelevance. Credentials having been re-established, Collapse Into Now finds Messrs Buck, Mills and Stipe doing pretty much whatever they like.

As a result, Collapse Into Now feels rather like 12-track R.E.M. primer, performing as it does a number of the band’s signature moves from their 29-year career. The opening brace of Discoverer and All The Best recall the tub-thumping rock of Lifes Rich Pageant and Document. Speedy rave-ups Mine Smell Like Honey and That Someone Is You are as hard rocking as anything on Monster and Accelerate, but power along in a decidedly more fleet-footed manner. The twinkling Every Day Is Yours To Win, the Hurricane Katrina-inspired ballad Oh My Heart and the lovely Walk It Back are redolent of the earnest, coffee shop-scented AOR of Reveal and Around The Sun – crucially, though, they’re stronger songs than anything on those two albums.

Occasionally the allusions are more specific. �berlin bears more than a passing resemblance to Drive from Automatic For The People but – whisper it – has a more compelling melody. It’ll be a worthy addition to any future R.E.M. Best Of compilation. Moody closer Blue deploys Stipe’s surprisingly effective speak-singing, last heard to any notable effect on 1996 single E-Bow The Letter (it also features that same song’s guest vocalist, Patti Smith). It Happened Today, with its rousing, woah-oah-ing finale (assisted by Pearl Jam‘s Eddie Vedder) echoes both Belong and Me In Honey from Out Of Time.

Mike Mills’ backing vocals are a rarely trumpeted component of R.E.M.’s sound, and it’s good to hear them playing a pivotal role in many of Collapse Into Now’s songs, having gone AWOL for much of the band’s recent output. His harmonies – whether simply shadowing Stipe’s, being let off the leash (Oh My Heart’s affecting chorus, the plangent Me, Marlon Brando, Marlon Brando And I) or ghostly and wordless as on Walk It Back – are among this album’s many appealing aspects.

The only duff note is sounded on Alligator Aviator Autopilot Antimatter. It’s a rather strained attempt to ‘rock out’ featuring an unusually non-sweary Peaches wittering on about being “a walking science fiction” while Stipe throws out enigmatic lines like “I feel like an alligator / Comin’ up an escalator” on top of over-excited guitars. It sounds like Juliette And The Licks. That is not meant as a compliment.

It’s the only obviously forced moment on an album that’s R.E.M.’s least self-conscious since Automatic For The People. Unlike, say, Accelerate or Monster, the band seem content to write good songs, without having to react to the album’s predecessor. That’s not to say it’s R.E.M.’s best album in that period – that prize would go to 1998’s undervalued Up – and there’s a distinct lack of musical experimentation on show here: to reiterate the point, stylistically there’s nothing on this album that the band haven’t attempted before.

But let’s not cavil. Collapse Into Now is a fine album, and one that’s far better than any band together for three decades has any right to be. What a pity, then, that they’re not going to tour it.