by Jude Clarke
published: 16 May 2011 in Album Reviews
Tweet 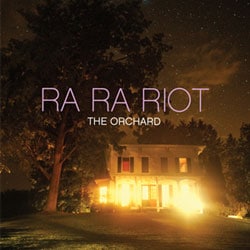 Syracuse band Ra Ra Riot’s second album – originally released in the US last year before label difficulties led to its subsequent delay over here – follows their well-received 2008 debut The Rhumb Line. Recorded in a studio situated in an actual orchard, The Orchard has some work to do if the band are to regain the momentum that they were beginning to build up three years ago, on the back of their debut and some popular live shows.

And in this, it succeeds only really in part. This is a band that makes clever, arranged, perhaps overly thought-out and orchestrated music with violin and cello parts often taking the lead, and synthesisers taking the supporting role. On opener The Orchard the strings are alternately staccato and arpeggiated, lending a sense of drama; while by the time the album reaches Kansai, second from the end, they have become somehow homogenised and homogenising – levelling out the music rather than elevating it, or picking out a particular melody.

Indeed, the dearth of much in the way of strong tunes is problematic. With the exception of Boy, Too Dramatic and the initially-appealing though repetitious chorus of Do You Remember, too many of the tracks seem based around a synth break or string couplet that is fleeting and somehow unsatisfying. These are not songs that lodge in one’s head.

Certain tracks have a distinct Yacht Rock feel to them: the Van Halen-like synth line in Too Dramatic has been acknowledged by the band, but there are also other echoes of the 1980s. The same track also brings to mind (undoubtedly unintentionally) 5 Star‘s System Addict, while Massachusetts (the title perhaps a nod to the Bee Gees?) recalls Donna Summer‘s State Of Independence in places, without coming close to that track’s grandeur and originality.

It doesn’t help that lead vocalist Wes Miles is possessed of an unassuming, mid-pitch and not overly expressive voice. Even on the most melody-infused tracks, the singing – as with the strings – fails to up the ante (Boy, Do You Remember). The standout track on the album, then, is one where the band’s cellist Alexandra Lawn takes vocal duties. Her expressive and engaging vocal contribution on You And I Know – along with its woozy, waltzy rhythms and shoegazey guitars – make this the only truly memorable song to be found on this otherwise disappointingly, frustratingly ephemeral collection.