by Bekki Bemrose
published: 9 May 2016 in Album Reviews
Tweet 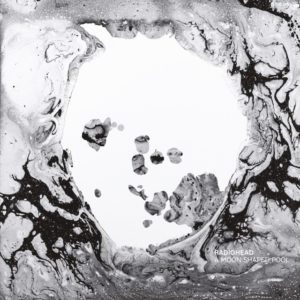 For all their ‘sticking it to the man’, you’ve got to hand it to Radiohead – they’re masters of modern marketing. A Moon Shaped Pool has arrived off the back of a slow burning tease of rumours, internet blackouts, a new company and eventually the promise of a date and time for digital release. To top off the pre-release talking points, the preceding singles were published on platforms Thom Yorke has previously described as “the last desperate fart of a dying corpse.”

Thankfully, the band have produced a record that elicits strong feelings; it has an immediate effect on the listener. They’ll be no scrabbling around for coherent thoughts like there was with the head scratchingly patchy and not wholly satisfying The King Of Limbs. The bottom line is A Moon Shaped Pool is a sure-footed improvement. Arguably, that record, along with Hail To The Thief, are the band’s weakest offerings, but even then those albums hold within them tracks that could slay many a lesser band’s contributions to the music pantheon. In many senses, it seems inconceivable that this band could, on their ninth outing, sustain the level they have over their 23-year career as a recording band. Alas, for cynics itching to tear them down with self-satisfied glee, the time for decline is decidedly not now.

The arrival of A Moon Shaped Pool was preceded by the release of videos for two tracks, Burn The Witch and Daydreaming. On first listen the former bore a striking, and momentarily frightening, resemblance to Coldplay’s Viva La Vida, albeit mainly because of the staccato strings. But fear not, the band had not sunk into the vapid, beige territory Chris Martin and co inhabit. They are, rather, reassuringly still paranoid, as Yorke warns, “This is a low flying panic attack.” The track is a bit of a red herring as far as the rest of the album is concerned. It works as a klaxon call, but its bombast is, for the most part, not apparent on the rest of the record. Daydreaming holds more clues as to the album’s direction. It’s fairly ambient in nature with a minimal arrangement decorated with little details. Electronics, piano and strings coupled with a fragile vocal from Yorke make for a contemplative and quietly moving piece.

This is a softer offering on the whole, and one that will no doubt reveal itself fully over repeated listens. Inevitably, there are songs that waste no time latching themselves onto your consciousness. Present Tense is such a track, with echoes of the opening of Nude, from 2007’s In Rainbows. It has a lovely bossa nova rhythm flanked by glimmering guitars that dance around Yorke’s meditations on precarious love. “Don’t get heavy/keep it light/keep it moving/I’m doing no harm,” he warns, or he fears, “That all this love/could be in vain”. It’s as beautiful a song as they’ve ever produced.

Ful Stop is an immediate highlight. The muffled, grinding beat swells into a threatening composition that contrasts those rhythms with uneasy electronics, creating an eerie tension. The suspense is slightly alleviated by the introduction of Jonny Greenwood’s familiar guitar licks. Along with Yorke’s repeated layered vocals, it makes for a delirious frenzy of a tune that is classic Radiohead, in texture and production.

Acoustic guitar takes the lead for The Numbers, and it’s an example of the band flitting towards the rock end of their spectrum, as opposed to the electronic side, an oscillation they repeat throughout. The instrumentation hangs lightly, with loose piano and Colin Greenwood’s funky bass line recalling that of Punch Up At A Wedding, from Hail To The Thief. The choral backing and swelling strings are common motifs throughout the album, and the styling is one foreseen in their rejected, and yet far superior, Bond theme Spectre. This is as close to a change in direction as the band make, and with tracks like these, it is a welcome one.

As it’s been widely reported, some of the songs on this album aren’t new, but have rather been knocking around awhile, waiting for a studio makeover. No doubt, True Love Waits will be the most contentious addition, being a long time live favourite. On first listen the marginally slower tempo feels overly meandering, possibly losing some of its emotional power in the studio process. But on further listens the finely drawn and more contemplative charms reveal themselves. The song, like the band, is older, more reflective and evidently no less powerful for it. Amongst the many rumours surrounding this release, one is that this will be Radiohead’s final recording as a band. If that were true you could see True Love Waits as a parting shot gifted to long time fans.

By now you either subscribe to the Radiohead world or you don’t, and in this instance all that they are loved for is present. There is nothing to change anyone’s view of them, but it is a collection that is as close to a crowd pleaser as they are ever likely to venture. Rather than flitting back and forth, here they seem settled on an amalgamation of their strengths, and with that, you do perhaps lose a little excitement that comes with the new directions they have often found themselves heading in. But then their brilliance has never been predictable. And this is as compelling and coherent a collection as they have ever made. It’s a record that you can delve deep into and really inhabit; everything’s in its right place.