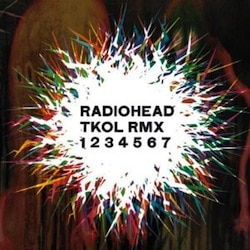 As a series of seven 12″ singles, Radiohead’s commissioned remixes took on the feel of a serial wave of gradually evolving permutations of The King Of Limbs, perhaps one of the most divisive albums of 2011. Initial critical reception of the original album ranged from emphatic praise to lukewarm acceptance or outright dismissal, but as time has told, The King Of Limbs wears deeper and more fulfilling with each repeated listen.

Devoid of the comfortable distance of passing time, though, TKOL RMX 1234567, is a daunting, weighty, and brooding affair, spanning 19 tracks over two discs and very nearly two hours. Here, we’ve got no less than five remixes of Bloom (by Harmonic 313, Mark Pritchard, Blawan, Objekt, and Jamie xx), along with multiples of Lotus Flower, Little By Little, Give Up The Ghost, and sundry others. While The King Of Limbs operated in a sort of twitchy, electronically-minded, claustrophobic cage of tightly locked-in percussion and jittery flourishes, the remixes here tend to reduce the music to its lowest common denominator, rarely leaving much of the Radiohead originals intact, save for cut and jumbled snips of Thom Yorke’s winsome falsetto, which are a nearly constant presence on the album.

Certainly, Radiohead have done their fair share to bring attention to underground electronic musicians; they’ve got Four Tet (who appears here via a spaced-out, wavelike Separator remix) out on tour with them, and this collection represents a carefully selected cast of artists from across the spectrum of electronic music. But they’ve also been involved in a sort of give-and-take relationship with underground music throughout the course of their career, both acting as stalwart representatives and intense listeners and sound-collectors. Underground artists like Brockenchord, Thriller, and Modeselektor (whose reimagined, gender-reversed Good Evening Mrs Magpie is one of the album’s high points of danceability) are unlikely to reach such a wide audience on the basis of their own releases, so it’s worth recognising TKOL RMX 1234567 on that basis alone.

It’s a symbiotic thing, Radiohead absorbing and repackaging underground electronic sounds, only to have them rechanneled and remixed again. “I think it appeals to us as a band at the moment that ideas and versions are not so fixed and set in stone, it feels kind of healthy for music,” Yorke said in the album’s accompanying press materials. And: “I was really curious to see how the people I was listening to so much would use what we gave them. I didn’t just want floor fillers and all that shit, I just wanted to see how the songs could really branch out and mutate.”

And mutate they have. Objekt’s Bloom is glitchy, and stutter-step, while Jacques Greene’s remix is a slow wash of drawn-out synth sweeps, and Blawan’s is thick with pounding, nearly industrial percussion. Caribou‘s Little By Little opens the album with a quiet confidence, interspersing sliced-up Yorke vocal samples with languid harp and escalating synth runs, while SBTRKT‘s Lotus Flower ends the collection on a sombre, ominous note.

What’s in between ranges in style and approach, but it’s all linked to a central problem: The King Of Limbs is a twitchy, claustrophobic gem of an album that feels better suited to deep study and careful consideration. Despite Yorke’s much-parodied manic dancing in the Lotus Flower music video, the album’s cold soul does not lend itself to a carefree, fun-loving dance floor, and as such, the mutations herein are tentative, fragile things built on the backs of their producers, and limited, for the most part, in their relationship to their source material. But The King Of Limbs also took its time taking root, and it’s possible that the remixes on TKOL RMX 1234567 could have a similar slowly revealed subtlety lurking below their electronic exteriors.