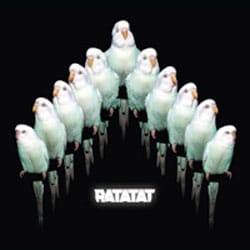 To subject yourself to the sound of Ratatat is brave on a whole newlevel. They’re an unstable, unnerving duo, priding themselves toprovocation and experimentation. Make no mistake: they ward off morelisteners than they lure in.

Witness Ratatat live and you see the band in their full costume:plumes of smoke rising from the base of the stage, one member jostlingwith his guitar while the other’s samples provide a mysticalforeground. Most of the time, you can’t even see the two through thefog as the distracting, thick bass notes that pulse throughout the settreat your ears with disrespect and lack of sympathy. It’s a unique,cinematic experience without the enhancement of a giant screen ofvisuals and laser beams. The albums leave you feeling just as baffledand enlightened, LP4 being a case in point.

Recorded at the back-end of what press releases like to call their”prolific” spell at Old Soul studios, Mike Stroud and Evan Mast’sfourth record could snuggle up nicely with their last work as adouble album. But whilst LP3 played out a band getting to grips withnew equipment and new ideas, this latest album – recorded at theclimax of their session at the upstate New York studio – is less aboutexploration and exudes far more confidence than its predecessor.

It perhaps shows the band at their creative peak; far away from anyother act out there, tactically combining trivial soundbytes, ethnicdrums, slap bass amongst plenty more, daring to match sonic elementsthat no other sane human being would. Yet somehow it works in theirfavour. If anything, Ratatat have removed themselves from any kind ofcomparison with LP4. It’s on an entirely different planet. No-onecomes remotely close.

Defining the album is the duo’s signature guitar sound: seeminglyspawned from ’70s US crime drama theme tunes, suitable for ridiculousair guitar routines. It splits opinion but it’s also the oneinstrumental piece amongst a thousand that allows people to identifyRatatat when they hear one of their songs.

Another characteristic of theirs is a knack for variety. Wrestlingtogether on LP4 are detuned synth lines and bongo drum patterns(Party With Children), futuristic space bleeps and deep-tonedbeatboxing (should-be single Neckbrace) and Latino guitars with whatmight just be a harmonica on Bare Feast. It all makes for somethingboth off-putting and infectious, planting its roots on the borderlinebetween disaster and sheer brilliance.

To subject yourself to 12 tracks of such diverseinstrumentation is a challenge. The fact that not a single effortedges over the five-minute mark helps, but there are patches inwhich the pace is skewed and the listener’s interest wanders off someplace else.We Can’t Be Stopped and Bob Gandhi come after an onslaught of anopening trio of songs and, although refreshing, are likely to be foundfar less entrancing.

LP4, without a shadow of a doubt, is the most self-indulgent,unpredictable record of the year so far. It’s a sonic experience notunlike Flying Lotus‘ Cosmogramma, requiring pitch blackdarkness and isolation to be fully appreciated. Many will declare thewhole thing ridiculous and tiresome. Others will join hands with theduo, who are clearly having an unhealthy amount of fun and aren’tshowing any signs of stopping.