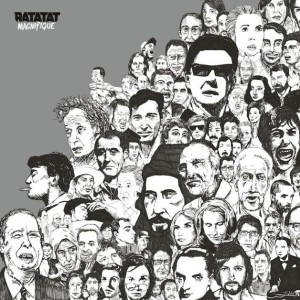 Those arriving at Magnifique uninitiated might see the album title, hear the album’s kitsch blend of stadium rock guitar and dance beats, and immediately peg Ratatat as a hot new French act. But Ratatat instead hail from Brooklyn, and have been releasing unpretentious, largely instrumental dance music for over a decade.

The five year gap between Magnifique and its predecessor LP4 wasn’t used to comprehensively remodel their sound. Instead, Magnifique finds Ratatat sticking to their time-honoured combination of Brian May-esque lead guitar, throbbing basslines and super-tight beats.

When it all comes together, the results are moreish. Standout track Abrasive sounds like the product of a lab technician who genetically spliced Queen, The Strokes and Daft Punk and saw that it was good. Cream On Chrome and Contach are funky, R&B-inspired tracks whose deceptively complex arrangements are testament to Ratatat’s studio skills. Nightclub Amnesia sounds like a robot on the disco warpath and is the kind of thing one imagines Daft Punk would still be making today if they had never left their teenage Paris bedrooms.

One would never go to Ratatat to satisfy a craving for slow jams, but some of the downtempo numbers on Magnifique are quite lovely. Drift, with its lovely Hawaiian guitar, resembles spaceage bachelor pad music, while Primetime sounds like the soundtrack to a lifestyle TV show beamed in from outer space. At the album’s end, I Will Return – a cover of a 1971 song by new age act Springwater – sounds rather like an electronic translation of Mark Knopfler’s Going Home.

At other times, though, the low-stakes nature of Ratatat’s sound can give the impression that the duo are merely amusing themselves to the detriment of everyone else’s enjoyment. For instance, the guitar on Pricks Of Brightness is played at such a comically high pitch that it feels like an elaborate joke played at the listener’s expense.

It’s unlikely there was any desperate clamour for a new Ratatat album during the duo’s prolonged absence from the scene. Nevertheless, Magnifique is a nice reminder of the band’s command of their tiny, unfashionable corner of the music world.