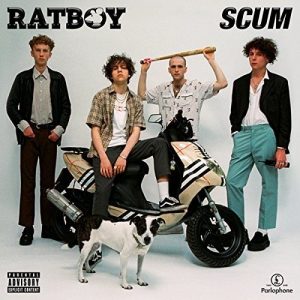 Essex native Ratboy – Jordan Cardy to his family – has been tipped for big things ever since his 2014 five-track Soundcloud release The Mixtape received airplay on several national radio stations and its creator was snapped up by Parlophone.

Inclusion in the BBC Sound of 2016 longlist followed before Ratboy was crowned Best New Artist at that year’s NME Awards. His ramshackle, boisterous sound, throwing together elements of hip hop, ska, punk and indie rock and laced with social commentary, drew inevitable comparisons to Jamie T and The Streets.

Ratboy’s debut album, the uncompromisingly titled SCUM, is released hot on the heels of his song Knock Knock Knock being sampled on Kendrick Lamar‘s LUST, a track from the American rap superstar’s latest record DAMN. While it’s unlikely to do for Ratboy what Eminem’s Stan did for Dido in the early 2000s, nevertheless, it’s evidence of the 21-year-old’s burgeoning status.

Like many debut albums from new artists, SCUM is rather a mixed bag. It’s brimming with ideas and energy, with some great moments, but at 25 tracks (including a series of short sampled interludes) it’s also cluttered and over-long. Focused on growing up in the urban Home Counties of the early 21st century (in Ratboy’s case, Chelmsford), it’s achingly current, combining anger and humour with occasional over-indulgence and ham-fisted lyrics.

First things first though: there are some cracking songs here. Top marks go to Laidback, a truly modern love song featuring a fellow Essex musician – none other than Graham Coxon of Blur – on guitar and boasting a memorable melody that fuses passion and pathos with real aplomb. Damon Albarn also crops up on keyboards and vocals on the less successful Get Over It.

Not far behind Laidback is opening track proper Turn Round M8, which gets SCUM off to a confident start with its swaggering reggae-influenced beats and soaring, almost gospel-like chorus. With its ragged guitar and gobby patter, breakthrough single Sign On is basically a cockney Arctic Monkeys, but no less charming for it. Knock Knock Knock, a tale of being held hostage in a studio, throbs with surly menace.

For every rough-cut gem though, there’s a damp squib. The interludes – often irritating faux-American snippets of silliness similar to those deployed on recent Gorillaz albums – are the chief culprits, but there are other examples of Ratboy allowing his enthusiasm to get the better of him. Boiling Point is a tinny rant that sounds like a pale imitation of XTRMNTR-era Primal Scream; Everyday undermines its prescient examination of youth poverty with its jarring, over-bouncy tune; Kicked Outta School offers the listener little other than a headache, which is a shame as it’s the final track of the record.

Lyrically, Rat Boy is also rather up and down. There is plenty of clever wordplay – Sign On’s “Poundland pubs and Wormwood scrubs/Last night’s takeaway in Tupperware tubs” springs to mind, as does Left 4 Dead’s razor sharp observation: “I’ve just got to nip up the Co-Op it’s just down the road/ I think they’ve got a working cash machine (You don’t have to pay for it there either).” Revolution’s state of the nation alienated anger is another standout. Elsewhere though, we get the stodgy, artless narrative of Fake ID, one of several occasions when Ratboy’s themes of hopelessness and frustration begin to wear thin.

SCUM is rarely subtle and its relentless pace can become a little bit much at times. Yet there’s enough promise here to suggest that with more development and quality control, Ratboy could grow into an artist of significant stature.