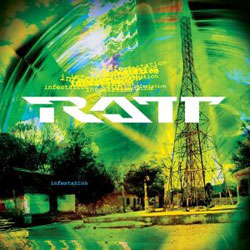 The ’80s had the Brat Pack on the silver screen and the Ratt Pack on the turntable. Ratt was one of the first and most successful glam metal hair bands of the decade, alongside Motley Crue, Poison and Twisted Sister, shaking their long locks as their guitar hooks shrieked like a communion of banshees.

After surviving several break-ups, including a “final” one in 1999, and the untimely death of guitarist Robbin Crosby, Ratt reformed in 2007 to play a few shows. It prompted the band to get back together in the studio and record a new album with the assistance of producer Micahe “Elvis” Baskette.

The slew of ’80s bands reforming to bank on their former glory days keeps growing, but what differentiates Ratt is a sincere and calculated effort to make a good album. Infestation is the best Ratt material since their hairy heydays and recaptures the sound that defined the band. While guitarist/founding member Warren DeMartini admits that they were aiming for the titanic appeal of the first two Ratt albums, Out Of The Cellar and Invasion Of Our Privacy are both prime examples of the melody-driven ’80s metal that was somehow lost in the ’90s and beyond.

What a start. Eat Me Up swallows all before it in its vintage hooks and relentless pumped-up oomph: “Take me to the other side/ Make me feel your energy.” The first single Best Of Me is classic Ratt, comparable to their older tracks, while A Little Too Much features scorching guitars, courtesy of DeMartini and former Quiet Rioter Carlos Cavazo. But many of the tracks are blues-infested, such as Last Call, reminiscent of the Ratt classic Way Cool Jr, or the infectious As Good As It Gets.

A quarter of a century after their debut, Stephen Pearcy’s unique voice still sounds the same, with that ratty sneer and bad rocker snarl, while the trademark guitar hooks still rock like a hurricane.

“Are you ready for big fun?” Pearcey asks on Lost Weekend, a thunderous anthemic tune sure to ignite audiences. It recalls music’s last great decade, with its metal mayhem and sleazy hair-raising Ratty antics. It’s fierce and filthy. “I got a bad reputation,” Pearcey sings on Garden Of Eden, a track that showcases Bobby Blotzer’s roaring drumming, almost stealing the limelight from the guitars. Elsewhere, Take Me Home offers a mellower moment; some may find it inconsistent with the rest of the album’s high-speed pace, but the band picks up again with closer Don’t Let Go.

Ratt deliver what their fans wanted: a modern take on their trademark sound, disregarding what the current market dictates, and never has a comeback been quite so damn efficient. Other bands should take note of how it’s done.