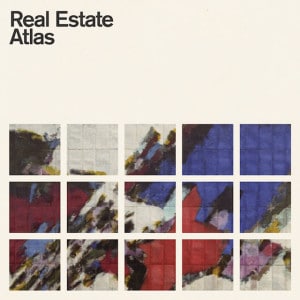 By now, you pretty much know what you’re going to get with Real Estate. Their previous two albums set down their template of sunny, breezy, laid-back guitars and whispy vocals, and Atlas takes up the baton and runs with it.

Yet while familiarity may breed contempt in some quarters, here it breeds a warm welcoming glow. Much of Atlas feels like walking into a warm home, with a fire ablaze and a comfy settee ready to sit on. Straight from the opening chiming chords of Had To Hear, you feel reassured. Rather like The xx, they do what they do beautifully well and see no reason to change that.

Even better, Real Estate seem to have sharpened up their songwriting chops this time around. While some of their self-titled debut and Days had a tendency to float over the listener, each track here has a hook that pulls you in. The aching yearn of Counting Backwards, the gentle chime of Crime or The Shins-like shuffle of Horizon are all pretty much perfect examples of how to write a great guitar pop song.

Of course, the trouble with having an identifiable sound is that all the songs gathered on an album can easily start to sound the same. This happens on Atlas occasionally, with the relaxed, floaty air created enabling a couple of tracks to just mesh into each other. Yet this is not necessarily a bad thing, especially when lead singer Matt Courtney’s sweet, easy-going vocals carry the tunes so well.

In fact, about the only departure on Atlas is the laconic country stroll of How Might I Live, which features bassist Alex Bleeker on lead vocals. Otherwise, it’s as you were, although each subsequent listen to the album reveals unexpected surprises – the instrumental April’s Song may at first just seem like a bit of jangly filler, but repeated listens uncover some beautifully intricate multi-layered guitar playing.

The aforementioned Talking Backwards also bears repeated listens. First time round it’s a sweet, harmony-filled delight, but it masks a previously unheard frustration – “I might as well be talking backwards, am I making any sense to you?” pleads Matt Courtney as he reflects on the perils of a long-distance relationship. It’s that underlying melancholy hidden just under the surface that makes Real Estate such a beguiling listen.

The gentle strum of Primitive is another highlight, while the blissed-out haze of closing track Navigator makes for a perfect ending – a bittersweet ode to the passage of time (“I’ve no idea where the days went,” muses Courtney as the song ends). It rounds off another excellent album from a band who know how to play to their strengths.