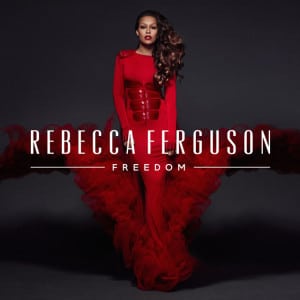 Of all of the X Factor’s many successes and failures, whilst others might have claimed more headlines, crafted more instantaneous singles or – in the case of One Direction, gone absolutely stratospheric – there’s a quiet, comfortable consistency to Rebecca Ferguson that leaves her as one of the show’s most likeable graduates.

2011 debut Heaven saw her producing one of the finest albums to ever emerge from the programme, teaming up with top songwriting talent including Eg White, Xenomania and Fraser T Smith to ensure her record was no bargain bin flash in the pan, but a surprisingly accomplished piece of work that revelled in both its rich production values and – it goes without saying – Ferguson’s considerable vocal talents.

The album went on to sell close on 600,000 copies, easily eclipsing winner Matt Cardle’s own debut effort. With such success behind her, it’s hard to fault Ferguson playing it safe with her follow-up effort Freedom. And whilst the record sees the singer going through many of the same motions, drafting in Eg White again for a brace of retro-tinged numbers, the consistency and quality of both the writing and production ensures another polished effort from the star.

If Heaven was a record that basked in a kind of halcyon-tinged dreamland halfway between yesteryear jazz and airy pop delights; Freedom sees Ferguson adopting a somewhat earthier sound. It feels like a more honest, grounded record – one less ensconced in sugary dreams of domestic perfection, and more concerned with a reality where success is as fleeting as it is thrilling.

Lead single I Hope is characteristic of the album’s tone – a strutting Adele-esque piece of female empowerment that sees Ferguson offering the bitter kiss-off “where there’s money, love is blind… after a time, I realised, that for me to grow, I’ve got to let go…” It is a startlingly bleak opener for the album, but one counterpoised with the innate warmth of Ferguson’s vocals, forever offering a glimmer of hope in an imperfect world.

Elsewhere, We’ll Be Fine sees Ferguson making a discernible nod toward Emeli Sandé; channelling the self-same Massive Attack-influenced production into a sprawling, string soaked anthem. Female popstrels are 10-a-penny these days, but the true diva seems a far rarer species – flamboyance and untempered passion more often than not traded in for kooky vocals and a casually strummed acoustic guitar. But Freedom, as an album, continually presents itself as bigger than that – songs like My Best and Hanging On offering up carnival-tinged exuberance and good-time vibes aplenty.

Across the record, the scale of powerhouse numbers like All I’ve Got play up against the hushed confidences of tender balladry – the heartbreaking John Legend collaboration Bridges chief among them. Just as with Heaven, Freedom feels like the kind of album to have the usual kneejerk naysayers of the X Factor and all it represents stopping to consider, nodding in appreciation and saying ‘actually, this is really rather good…’.

Is it a better record than Ferguson’s debut? Not quite. But with Freedom, Ferguson evidences a marked maturity as an artist – one that sees this record playing to her strengths on one hand, whilst showcasing a deeper, richer swathe of emotional depth with the other. Amongst a legion of former reality show contestants so often lambasted for being plastic, cookie-cutter clones, Ferguson’s music remains thrillingly suffused with life, personality and warmth.