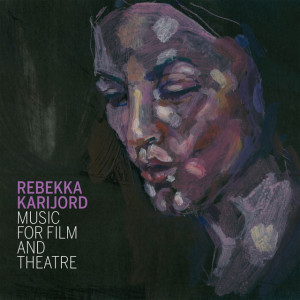 Norwegian born but now based in Sweden, Rebekka Karijord is well-placed to jump on the bandwagon that’s currently obsessing over all things Scandinavian. But she’s a songwriter who’s proved herself more than capable of surpassing current trends: she might have been compared to musicians like Ane Brun (with whom she has collaborated) and her Control Freak Kitten labelmate Anna Von Hausswolff, but her frequently sparse, piano-based songs reveal a particularly original talent.

Her first studio album The Noble Art Of Letting Go was released in Sweden in 2009, and got its UK release two years later. 2012’s We Become Ourselves certainly helped to cement her reputation, but many new fans might be unaware that she’s also an established composer of film and theatrical soundtracks. Music For Film And Theatre brings together selections from some of her recent work in these areas, comprising of some her contributions to three films, three plays and four dance pieces. It’s not exactly another side to Karijord – the same moods and textures are apparent here – but it shows the full breadth of her work and allows her previous albums to be appreciated in another light.

Pianos and organs dominate, but at times innovative layers or juxtapositions of instruments create striking atmospheres. The interplay of organ and guitar in Snö (from the film Jag Ser Dig) rising up out of a piano part and creaking strings is a fine example. Morula (from a dance piece by Hege Haagenrud) is a particular highlight, with bubbling analog-sounding synths played off against acoustic drones.

The material is primarily instrumental, but vocals are also used innovatively. In Salhus (from the film Nowhere Home), the singing emerges from the soundscape gradually, while Kjaere Gud Jeg Har Det Godt (also from Nowhere Home) is produced largely from layers of singing, forming the effect of a faintly eerie choir.

As a compilation, this is an effective record, both as a showcase of Karijord’s compositions and as a straightforward package of music from stage and cinema. However, it’s carefully curated enough that it works well as an album in itself. There are occasional moments, such as the titular piece Nowhere Home, where you feel outwardly aware that you are listening to a soundtrack, although this is of course no slight on the quality of the music. But there are many other moments when it’s easy to forget that this is a compilation rather than a deliberately unified album of modern classical music of an ambient bent. Even the simple bookending of the whole thing with the Prologue and Epilogue from Nowhere Home is a smart move, bringing a sense of continuity and resolution.

An understanding of traditional forms coupled with a willingness to twist them into new shapes is a hallmark of several tracks. Madrigal (from the play Hjärtats Beatbox) features the vocal polyphony of its baroque antecedents, but the arpeggios have a tone that invites you to question whether they are actually sung or whether they are in fact synth sounds. Lullaby turns the form’s traditional purpose on its head by being the accompaniment to a dance piece. The cold, slightly eerie Waltz For Norma (from the film No Man In Sight) is reminiscent of Yann Tiersen’s soundtrack to Amelie, but much darker.

A good soundtrack not only forms an integral part of the film or play that it was written for, but is also strong enough to be enjoyed in its own right. With this record Rebekka Karijord takes that principle even further. The pieces included here have enough substance that each one works on its own terms, but more importantly still, the album actually functions as an album with all the necessary ups and downs, ebbs and flows and ideas and motifs.