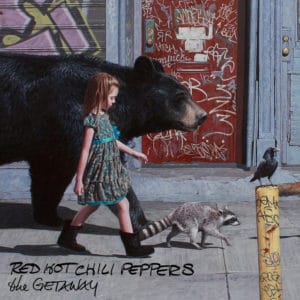 The Getaway is Red Hot Chili Peppers’ eleventh studio album, their first since I’m With You five years ago. It’s another substantial offering from a band who don’t short-change either at gigs or on albums, with 13 tracks and lasting almost 55 minutes. Since moving away from the alt-funk/rap/metal rock of their ’80s output, they have solidified into a more mainstream, stadium-rock outfit. But the new album shows the band trying to develop in new directions, away from muscular rock posturing towards more subtle harmonic textures: at times closer to chilled than chili.

Frontman Anthony Kiedis gives his customary rhythmic vocal delivery, while his lyrics about sex, drugs and hanging out in sunlit California are as randomly rhymed as always. Flea’s unmistakable slap bass and Chad Smith’s sharp drumming ensure the RHCP’s tight grooves remain compelling. But Josh Klinghoffer (in his second outing after the departure of his virtuosic predecessor John Frusciante) now makes a genuinely distinctive contribution with his understated, colourful guitar-playing style.

The biggest difference though is that for the first time since before 1991’s breakthrough Blood Sugar Sex Magik Rick Rubin is not producing a RHCP album. Instead, The Getaway is helmed by Danger Mouse (Gorillaz, Gnarls Barkley, Black Keys), who apparently persuaded the band to discard the 30 songs they’d already written in favour of creating new material with him in the studio. And it’s had a refreshing effect.

The opening title track exudes a mellow vibe with throbbing synths and delicate guitar meanderings overlaying a steady groove. Despite its title and mysterious lines like “You don’t know my mind/You don’t know my kind”, lead single Dark Necessities’ musical mood is still jazzily laid back, with a deeply funky bass line and a tasty guitar solo.

The wistful The Longest Wave reveals Kiedis as an ageing playboy: “Sterile as the barrel/Of an old 12 gauge/Under my skin/And half my age.” In Goodbye Angels he raps about the drug suicide of a girl “born to die in the eternal spring”, with a bridge featuring a (heavenly?) choir. Sick Love continues the darker theme ‒ “I could smell the Prozac in your pretty hair” ‒ though Elton John and Bernie Taupin are credited as co-writers due to its melodic similarity to Bennie And The Jets (with the Rocket Man playing piano).

In Go Robot Kiedis gets up, close and personal with an automaton to a disco beat, while Feasting On The Flowers is an elegy for RHCP’s original guitarist Hillel Slovak, who succumbed to a heroin overdose. Detroit is a return to the band’s earlier, heavier sound, with namechecks for Funkadelic, The Stooges and hip-hop artist J Dilla. And the psyched-up Dreams of a Samurai ends the album with a big choral finale. Though it’s hardly a full-blown reinvention, The Getaway shows that even after more than 30 years in the business Red Hot Chili Peppers still have something new to offer.