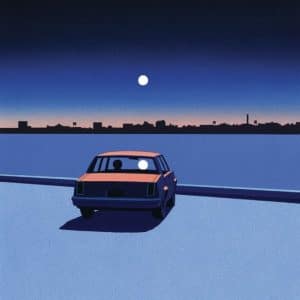 Petrification was Medusa’s unjust curse, born out of revenge for her passionate dalliances with Poseidon in the puritanical goddess Athena’s temple. The capacity to turn those who gazed upon her to stone, and her beauty maliciously deformed, it was Perseus who, sent to slay the misunderstood Gorgon, did so by holding a mirror to her face so that she may see the malevolent changes wrought upon her, cruelly inducing her own anguished ossification and decapitation. His poetic mythologies gave rise to the Perseids, the meteor shower that each year scrapes and burns through Earth’s atmosphere – and which act as the primary influence on Requin Chagrin‘s twinkly new record, Bye Bye Baby.

Mixed by Margate’s very own Ash Workman (the producer who’s previously worked with Veronica Falls, Teleman, Baxter Dury and Christine And The Queens) these potently hopeful songs reflect upon the many wishes that Marion Brunetto, the artist behind Requin Chagrin, cast upon witnessing the shooting stars during their annual rotation, and the desire for romantic renewal that invariably underpinned each aspiration.

On this amiable and divine third album of lusciously contemplative dream pop, the Paris based multi-instrumentalist’s dreams appear to come true. As she blazes her incredible trail through the darkness of the night sky, nonchalantly lighting up the unrealised desires of gods and mortals alike, you might just want to hitch a ride on her radiance and see how close to heaven you’re willing to go.