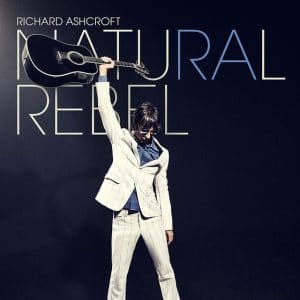 Richard Ashcroft may regard himself as a natural rebel but the music on his new album is thoroughly unadventurous. His fifth solo outing (not counting the pseudonymous RPA & The United Nations of Sound debacle) mainly cruises at a pedestrian pace straight down the middle of the road. It’s a far cry from when he was front man of The Verve riding the crest of Britpop in the ’90s, though Natural Rebel does contain echoes of those glory days.

This is Ashcroft’s first solo album not to be produced by Chris Potter, but co-producers Jon Kelly and Emre Ramazanoglu don’t bring anything new to the table. All 10 tracks are written by Ashcroft alone, but he seems to be crying out for some creative collaborators. Though Natural Rebel has its moments, it all feels a bit staid and stale: not so much rock’n’roll rebellion as conventional cliché, both musical and lyrical.

After the half-hearted attempts at electro pop and half-baked political statements in his previous album These People in 2016, Ashcroft has gone back to the tried and tested: a formulaic guitar sound augmented but not enlivened by strings and vague notions of self-renewal. The result is hackneyed rather than rejuvenating. The distinctively gravelly soulful voice still sounds great but the delivery is a bit lazy at times, going through the motions rather than impassioned.

Opener All My Dreams chugs along pleasantly with a mid-tempo beat without really going anywhere, recycling Tom Petty in a love song in which Ashcroft claims his feelings (for his wife, presumably) have not aged: “Don’t talk of gettin’ old.” Despite its title Birds Fly is another song that doesn’t quite take off: the pedal steel guitar give it a mellow countryish flavour but with Ashcroft pining for some “winter sun” it includes the naff lyrics, “They’re dancing in a pool down from your room / A pool that my tears have formed”.

More lively is the upbeat lead single Surprised By The Joy featuring bluesy guitar licks and soaring strings, with Ashcroft conveying a sense of personal regeneration: “Surprised I’m alive I guess / I’ll say hello to the world again.” That’s How Strong strains to be an epic love ballad but like Ashcroft’s faltering attempts at falsetto the song fails to hit the high notes it strives for with its overblown choir and syrupy string arrangements.

Better is Born To Be Strangers, a slice of disco-rock with groovy riffs and a strong backbeat boosted by some tasty horns, though it shows Ashcroft unconvincingly romanticising himself as a rebel: “’Cause some of us are born to be strangers / Alone in this world we seek out danger.” That’s When I Feel It breezes along with a positive vibe without making much of an impact, while in contrast We All Bleed is a slow melancholic number where humanity is united by pain and Ashcroft self-mythologises again: “Born to fly, I’m here to sing.”

In A Man in Motion acoustic guitars are to the fore, with the words “All I need is speed” unfortunately ironic as the song lacks momentum. The piano-led Streets of Amsterdam conjures nostalgic memories of youth – “We could just let it roll” – with a redundant reference to John and Yoko’s bed-in for peace.

The album ends strongly on Money Money, an all-out rocker with screaming guitars and Ashcroft doing his best snarling Billy Idol impression with a “rebel yell”. Its unclear lyrics mix contemptuous insults (“You know your songs mean nothin’”) with materialistic demands (“I want my money”) – is Ashcroft referring to the Verve’s disastrous legal dispute with the Rolling Stones over royalties for Bittersweet Symphony? If so, he’d better be careful because this closing track has a hint of Gimme Shelter about it.