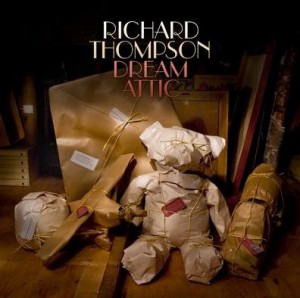 He may have now turned 60 and curated his Meltdown earlier this summer, but Richard Thompson shows no signs of stagnating creatively. Dream Attic is Thompson’s third live album, but it’s a live album with a difference – all the songs performed here are brand new.

Recorded live at a series of gigs across the West Coast of the USA last year, Thompson says that the thinking behind recording the album in this way was that “it’s only when musicians play in front of an audience that something interesting happens”. That theory is certainly proved correct on Dream Attic – you can almost hear the chemistry bubbling between Thompson and his band here.

His bile hasn’t disappeared either – opening track The Money Shuffle takes aim at the bankers who sent the world financial market into such a tailspin recently. “I love kittens, and little babies, well can’t you see that’s the guy I am…your money is so safe with me” sneers Thompson, his voice dripping with sarcasm. It’s a brilliant opener, leaving the listener in no doubt that the famously caustic Thompson has no intention of mellowing with age.

Dream Attic displays the many sides of Thompson – the folk music for which he’s justly famed is catered for in the traditional sounding Among The Gorse, Among The Grey while those who admire his electric guitar skills will be more than satisfied with Sidney Wells. Although the latter drags on slightly, it does feature a guitar solo so incendiary it almost burns through the speakers.

Thompson is also a master storyteller, with Here Comes Geordie being a delightfully vicious putdown of a self-righteous Geordie millionaire “in his private plane, got to save the planet once again…righteous as can be, chopped down a forest just to save a tree”. Any resemblance to a certain Mr Gordon Sumner are purely coincidental, we’re assured.

When he’s not having a pop at self-important pop stars or greedy bankers, Dream Attic also finds time to be reflective. A Brother Slips Away is an impossibly moving tribute to the many friends of Thompson’s who have passed away, while the brooding and intense Crimescene rails “against the dying of the dream”. Mostly though, the mood is upbeat, such as on the excellent Demons In Her Dancing Shoes, an exhilarating tale seen through the eyes of “those wholesome girls down Chapel Street”.

Being a live album, some tracks are stretched out beyond their natural lifespan (the average length of the songs here is about six and a half minutes), but even then it’s a joy to listen to the interaction between Thompson and his band, especially when he’s effortlessly peeling off searing guitar solos such as that which closes If Love Whispers Your Name.

There’s also a deluxe version of the album available, with all acoustic versions of the tracks – while the songs are strong enough to hold up in this format, the energy and atmosphere of the main album is missing slightly. No matter which format the songs are in, Dream Attic is the sound of a man in no mood to sit back in comfy retirement.