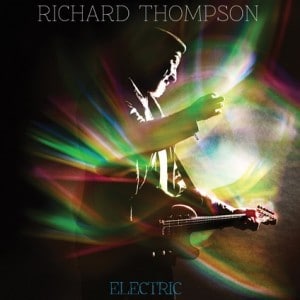 Richard Thompson’s total dedication to the twin crafts of songwriting and performance sees him release music with dependable regularity. His drive has shown no sign of diminishing with age. 2011’s Dream Attic was a furious live recording of all new material, whilst this successor is a studio set with a similar fury and energy. The two albums feel like companion pieces, Thompson’s rather alarming description of this music as ‘folk funk’ proving a little misleading.

The funk tag is overly reductive, but not completely wide of the mark. Thompson has not suddenly become a funk circus ringleader in the manner of George Clinton and Electric is still indebted to traditional folk roots. Nevertheless, it is certainly among Thompson’s grooviest outings and carries with it a heavy band vibe (drummer Michael Jerome seems to have a growing presence in Thompson’s ensemble). Producer Buddy Miller (himself a skilled songwriter and brilliant guitarist) seems to have an effortless understanding of Thompson’s sound and vision here, capturing a rawness and passion inherent in the music and the album as a whole skilfully balances traditional English and more contemporary American influences. There’s a grittier approach to tracks such as Stuck On The Treadmill and even a surprising engagement with the blues (something Thompson has occasionally been criticised for sidelining in his conception of folk music) on the raucous, caustic Sally B. Yet Electric is not a radical departure, but more a further subtle refinement of Thompson’s long established artistry. It is almost inconceivable that he could ever make a bad album.

There is an immediacy to Electric courtesy of its predominantly biting, incisive songs. Opener Stony Ground is a case in point, delivered with a near-brutal insistence. There’s also the almost basic Good Things Happen To Bad People, one of his most infectious and accessible songs in some time. Lyrically, there’s a presiding sense of anger, perhaps carried over from Dream Attic, and manipulative women remain common currency in Thompson’s songs. His songs often seem to deal with cruel caricatures, and this is reflected in the crisp, excoriating tenor of the music.

As with most of Thompson’s later albums, however, what is most impressive about Electric is its depth and range. Despite being stripped down and potent, Thompson and his band are able to conjure a range of moods, atmospheres and impressions. In spite of the album’s title, a number of tracks have a more acoustic flavour. Salford Sunday is lilting and beautiful, whilst Another Small Thing In Her Favour is a carefully constructed, subtle and heartbreaking piece of songwriting. It is not hard to imagine either of these songs quickly becoming classics within the Thompson canon. There’s also a moment of darker ambiguity in My Enemy.

For all his stature as an auteur singer-songwriter, Thompson albums generally seem to be as much the product of collaboration as they are the work of a man gifted with words, chord changes and melody. This album is arguably more informed by the sound of his live band than any of his previous studio albums. In its creation of something towering from fundamental, basic elements, it is alchemical.