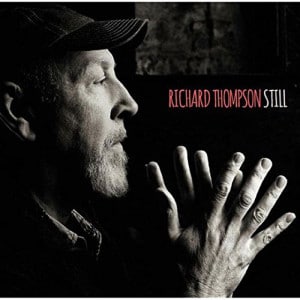 Now on the 16th album of his solo career (not to mention genre-defining work with his former wife Linda, and with folk godfathers Fairport Convention), Richard Thompson is long past serving up surprises. For by now, you’re pretty sure what you’re going to get with a Thompson album – and, despite employing Wilco‘s Jeff Tweedy on production duties, Still fits very nicely into his latter-day canon.

This is, as anyone who has ever heard a Richard Thompson album will testify, no bad thing. Following on from the success of Electric, Still is a pleasingly eclectic album (for all of Thompson’s identification with folk, there are rock stompers sat next to plaintive ballads) with Thompson’s trademark guitar pyrotechnics never threatening to overshadow his considerable songwriting skills.

Nowhere is this more charmingly demonstrated than in Guitar Heroes, the seven minute tour-de-force that closes the record – an autobiographical tale of Thompson staying in on a Saturday night to practice his guitar playing, it sees him namedropping the likes of Django Reinhardt, Les Paul and The Shadows before slipping into a note-perfect impression of each hero’s style. In anyone else’s hands it could be a horribly contrived and overtly showy piece, but Thompson’s sheer charm and talent means he pulls it off in spades.

Elsewhere, the tone is less self-referential and we’re reminded of what an affecting songwriter Thompson can be. Although there’s nothing that quite tops classics like 1952 Vincent Black Lightning or the still startlingly vicious Don’t Tempt Me, there are enough examples on Still to prove that he’s still at the top of his game. The opening She Never Could Resist A Winding Road is a gorgeously folky ballad, and Long John Silver is an incendiary blues stomper that’s bound to go down a storm at Thompson’s live shows.

For most of the time, the guitar solos are reined in somewhat. At first, this may seem a bit odd, like giving Lionel Messi a football and instructing him not to try any of those fancy tricks with it, but it works, and gives songs like Patty Don’t You Put Me Down and the blistering, heads-down rock of No Peace No End more room to breathe, the guitar riffs being used as a solid backbone to the songs rather than a chance to show off.

Thompson’s acerbic sense of humour is still present and correct too – All Buttoned Up tells the tale of a beautiful girlfriend who “crosses her arms to hide all her charms” and “changes with the weather, keeps her knees together”. Having listened to a sixty-something man complain that he can’t get a shag, if you can ignore the rather icky sentiment it’s brilliantly played. The bruised anti-love song Where’s Your Heart is similarly caustic, but more brooding, and Josephine sees Thompson return to his folk roots, a haunting portrait of a woman who “cries desolation to phantoms….but nobody hears”.

Tweedy keeps up an unobtrusive presence throughout, letting Thompson play to his strengths, and it all results in another reliably consistent album. While there’s nothing particularly striking about Still, it’s another example of the sort of thing that Richard Thompson does best.