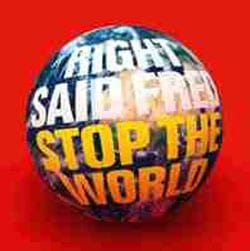 Right Said Fred have never been known for their lyrical genius or musical mastery and their newest offering, Stop The World, is further affirmation that they’re never likely to be. While there’s no doubting the fame and fortune their debut single I’m Too Sexy secured them back in the early ’90s, it remains a mystery as to how the Fairbrass Brothers – Richard & Fred – have managed to stay afloat some 20 years on.

With a total of six albums to their name – this being the seventh – the brothers still maintain there is little to be gained from taking a serious approach to music. This in itself appears to be the only consistent message throughout the entire album.

Stop The World is the first of 12 tracks and at best unravels like a painfully patronising playschool programme. It opens with a child-like synthesized melody and builds to a hugely disappointing non-event with lots of random rhyming words thrown in for good measure including “Here’s my handle, here’s my spout, what’s it all about?” Buggered if we know.

Once past that we reach Julianne, an ode to a loved one in which Fairbrass sings: “I would be your egg if you’d be my bacon”. It doesn’t get much deeper than this; the rest of the album continues in much the same vein.

There are moments of hope musically in Raining In England. Co-written by indie-pop singer/songwriter Clyde Ward, it has all the foundations of a good melody, but is quickly diluted by Fairbrass’s mediocre vocals, not to mention its extreme right wing lyrical undertones. Similarly, We’re All Criminals takes an overt stab at life under CCTV, in which he sings “And you can find yourself in court, if they don’t like your sort”. It’s dogwhistle stuff.

You can’t help but wonder if the Putney-born duo enlisted the help of Ukraine drag artist and Eurovision finalist Verka Serduchka for Waiting For A Train, a track in which they too appear to become so bored of their own lyrics they substitute the chorus with the words “choo choo”.

I Ain’t Your Guy is straight out of the Stock Aitken Waterman school of songwriting but is beyond even Jason Donovan‘s repair, while Feels Like Love sees the boys attempt cheesy country a la Black Lace style.

After a painstaking 40 minutes the album finally concludes with Two White Boys, a track the Fairbrass brothers are quick to defend as having nothing to do with race or colour. Interpret it as you will. It’s doubtful there’ll be outcry, as listeners will have had to endure the 11 poorly produced and ill-conceived tracks that proceed it to reach it. Maybe those body conscious Fairbrass brothers aren’t as deeply dippy as they’d have us all believe.