by Philip Matusavage
published: 7 May 2013 in Album Reviews
Tweet 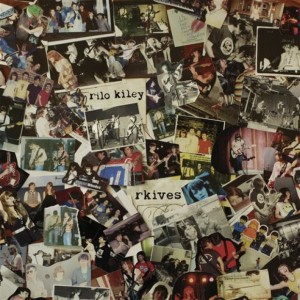 It would be an understatement to say that Rilo Kiley’s split was a messy affair. After a series of well-received albums (including More Adventurous, a contender for album of the ’00s), their 2007 release Under The Blacklight was both their most commercially successful and their most divisive. Many of their long-term fans absolutely hated its polished AOR take on the band’s country-rock; certainly it sounded somewhat contrived to bring the mainstream success which had largely eluded them previously.

Four years of silence followed until, in 2011, band co-founder Blake Sennett confirmed that it was all over, citing “a lot of deception, disloyalty, greed and things I don’t really want to submit myself to”. All in all, it was a sad and ignoble end to a band which many people had fallen deeply in love with.

It’s heartening, then, that rkives allows Rilo Kiley to have the kind of send-off that they deserve. A career-spanning collection of previously unreleased tracks and obscurities, it is much more a labour of love than a perfunctory ‘greatest hits’ collection would have been – something underlined by the album artwork and promo video for lead single Let Me Back In, all of which use the band’s personal photos, film footage and handwritten notes. The whole affair has a sweet-natured grace which erases the uncomfortable bitterness which characterised the band’s demise.

The album flows in a sort-of reverse chronological order, kicking off with six previously unheard songs. As a mini-EP of ‘new’ material, these musically diverse tracks are strong enough to make you yearn for the fifth album which will probably never come. Let Me Back In is a laid-back but confident opener which almost serves as an apology to the fans for how the band departed, finding vocalist Jenny Lewis singing “I’m sorry for leaving” but lovingly observing that “No matter how wrong I’ve been LA, you always let me back in”. The context of this compilation can’t help but load many of these songs with an added layer of meaning – the brilliant It’ll Get You There sounds like someone mournfully looking back at what they’ve done to reach the top and regretting much of it; Lewis seems to reject the “hearts that you break” and the “little white pills you take” and instead opts for a humane simplicity, ending on the note “I will get you there.”

The theme is repeated on the driving indie-rock of All The Drugs which scorns the rock and roll LA lifestyle. It sounds rather pointed given that Jenny Lewis and Blake Sennett had a personal as well as professional relationship, but the gorgeous country lament of Bury, Bury, Bury Another offers a gentler slant on the toll success takes on relationships: “We wish our ex was by our side and the loves that you had, they didn’t please you enough/Now your face is in your hands and you wonder if anyone ever will.” Sennett takes lead vocals and has his say in Well, You Left but while it’s clearly about the end of a relationship, his hangdog delivery and the outstanding mix of bouncy brass and furious guitar makes the song far more amiable than it might have been.

If these six songs hang together wonderfully, it’s a pleasant surprise to find that most of the accompanying rarities and b-sides slot alongside them neatly. Indeed, to the casual listener it would be impossible to tell that the 2007 b-side Draggin’ Around was an ‘old’ song, though this is in part due to the fact that its lyrics are valedictory (“I’ve had enough, raise up your cups”). A remix of Under The Blacklight’s Dejalo featuring the rapper Too $hort, however, sticks out. Its dance beats and sexual lyrics mean it bears comparison to Britney Spears and it’s exactly the kind of latter-day move which so infuriated purist fans. They shouldn’t take it so seriously – it’s rip-roaringly funny and entertaining. As if to show Rilo Kiley’s range, it’s followed by gothic epic A Town Called Luckey, which sounds not unlike Cocteau Twins covering The Cure. It’s an accomplished narrative about a woman who escapes her life and takes stock with a stranger she meets in a bar, and its middle-section features stabbing guitars and screamed vocals from Lewis. It’s one of the highlights here.

Given the nature of this exercise it’s to be expected that the climax of the album might be an emotional send-off, and so it transpires. A sweet demo version of Rest Of My Life from 2001 debut Take Offs And Landings finds Sennett singing that “For the rest of my life I’m gonna search for someone just like you,” a lyric which becomes unbearably poignant given what transpired. The final track takes us back to the beginning – The Frug was the lead track on the band’s debut EP and its irresistible quirkiness and dreamy harmonies remind both of how great Rilo Kiley were and of what we’ve lost.

If not everything here is essential, rkives acts both as a loving rapprochement with Rilo Kiley’s diehard fans and a surprisingly coherent introduction for new listeners. Above all, it’s a love letter to one of the best bands of the past 20 years. The various members of Rilo Kiley may have moved on to other musical ventures (Lewis is currently on tour with The Postal Service) but nothing will ever quite match up to the magic they had together. That even some of that magnetism is captured here is a far better end than we could have hoped for.