Róisín Murphy – Take Her Up To Monto 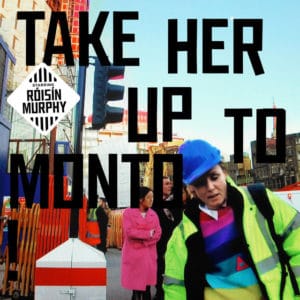 Róisín Murphy has never been your common-or-garden pop star. Ever since her band Moloko (hardly a conventional band themselves) split, Murphy has followed her own path, thinking nothing of ending an eight year hiatus last year with an album called Hairless Toys, a brilliantly strange and startlingly ambitious album with no obvious hit single which still managed to garner a Mercury Prize nomination.

Now, just over a year after Hairless Toys, Murphy’s released another album from the same sessions with producer Eddie Stevens. It’s more of a companion piece to its predecessor than a sequel – in fact, if anything it’s even more obtuse and uncommercial. Yet it’s the sort of record that you can’t tear yourself away from, mainly because you’re not entirely sure what’s coming next.

The cover, featuring a shot of Murphy in a hard-hat and a high-visibility jacket, gives no clues to the exotic delights of Take Her Up To Monto. The shimmering disco of Mastermind opens the album, and is one of the more conventional tracks, despite its six and a half minute running time and the lack of any sort of chorus. It also sets up a decent template for the album in its tonal shifts and pervasive air of slight creepiness.

For Murphy is completely unafraid to subvert expectations throughout the album: the brilliant Thoughts Wasted is positively bursting with ideas – starting off as a slow-burning downbeat synth number, before suddenly changing tack with some Radiohead-style baroque strings before ending with a lengthy spoken word passage where Murphy dolefully intones “humans are fucked”. The fact that this song is preceded by Pretty Garden, a light as a feather jazzy cabaret number which appears to be about pubic hair (“look at me all naked, I let my pretty garden grow wild”) just makes it all the more entertaining.

Ten Miles High is more accessible, but no less inventive, featuring a slow build from its doomy introduction before exploding into full-on banger territory in its last two minutes. At the other end of the scale is Lip Service, a simple, jazzy ballad featuring much instrumental noodling underneath Murphy’s whispered vocals – on one hand, it’s the perfect song for lying out in the sun to, but on the other there’s a weirdly uneasy air to it that stops you becoming too comfortable.

There’s certainly no chance of feeling comfortable during Nervous Sleep, a meandering seven minute long epic featuring a ton of reverb, bleeps and a near imperceptible, almost spoken-word vocal from Murphy. It’s not the sort of thing you’d choose to put on during a party, but it’s a fascinating sound of a journey into a fractured mind. Ending the album with this and then the discordant ballad Sitting And Counting means that the album does seem to fizzle out somewhat rather than ending on a bit of a flourish.

Yet, as has been made perfectly clear by now, Róisín Murphy is not one to do things the conventional way. For everyone who felt that eight year break was an eternity, Take Her Up To Monto will be manna from heaven. It’s yet another gloriously odd missive from Ms Murphy.