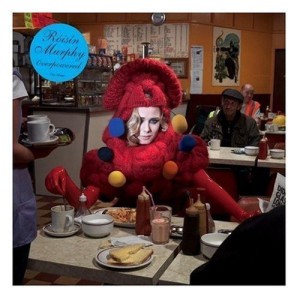 Following up her underperforming debut Ruby Blue, former Moloko frontwoman Róisín Murphy is back with her second solo album. Now signed to EMI, she’s made her most coherent album yet.

Murphy’s songwriting appears to be stronger than ever with a consistent style and sound emerging throughout. She puts this assured sense of purpose, in part, down to a recent obsession with old disco and house music. In her own words she wanted Overpowered to be an album to find a link between that music and what she could achieve in a modern way.

When coupled with the armyload of credible producers she managed to get on board, including Andy Cato (Groove Armada), Seiji (Bugz In The Attic) and Richard X, she’s come up with an album full of classy and confident dancefloor tunes incorporating sounds that will transport you back to the sound of old disco classics. Just check the ’80s-style bass on the synthesised soul of Footprints.

Nearly every track could be a single. We’ve already had the stylish title track Let Me Know, with its piano-led soulful funk. But don’t be fooled into thinking that those songs make up the best part of this album. On first listen, it’s striking that pretty much every song stands alone and we’re spared filler (a problem that Moloko seemed to suffer from).

The album progresses faultlessly as the tempo stays dancefloor friendly throughout, and the strong melodies on the likes of You Know Me Better and Movie Star ensure enough variety to prevent everything sounding the same. The latter is the only song written in its entirety by Murphy (she co-wrote all the others), and it’s the most unashamed pop song on here.

Primitive is less Hi-NRG than the rest, but works well, and if backed with some decent remixes could certainly appeal to a wider audience and do well as a single release. Album closer Scarlet Ribbons, the one track that tries something completely different and forgoes the beats, is the only track that doesn’t work.

Murphy’s strength is that she seems able to infuse some genuine soul into tracks that already combine house grooves with pop hooks. Surely a winning formula. But somehow she seems to be missing out on the commercial success that should be coming her way. The difficulties encountered at the release of her last album must have served as a warning, and it’s not clear that she’s surmounted the issues that have left the record-buying public apathetic to her. While she’s got an album full of pop gems, there’s a genuine feeling that it’s going to slip by unnoticed.

Maybe she’s quite happy staying on the fringes. Perhaps there’s a problem with Róisín’s image. Or perhaps she’s lacking that one killer track that would really capture this country’s heart. It’s difficult to figure out. But whether we’re ready for her yet or not, this is an album that exceeds expectations and is unlikely to disappoint those who do bother to listen to it.