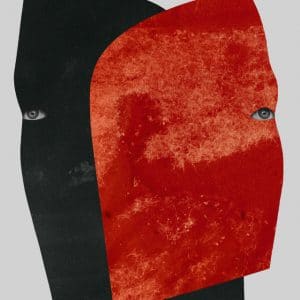 Ryan Lee West is not a man to shy away from his identity. Persona, his fourth album under the Rival Consoles moniker, is a closely focused and deeply personal study of the human brain and its characteristics. Inspired by Ingmar Bergman’s film of the same name, it examines personalities both portrayed and withheld.

Heavy stuff, you might think – but only if you approach it that way. While at times Persona can be a brooding, crouching figure, it also finds time to step back for moments of purely blissful ambience, West being aware of the ebb and flow his music needs to reflect the personalities he has in mind.

Initially it seems Persona will be sparse on melodic material, but then the building blocks are put to work, propulsive beats are used, and some really persuasive cross rhythms come into play. The rhythmic undercarriage is in fact incredibly strong, and works even better when West complements it with the scratchy sound of a double bass, operating towards the lower end of audible pitch but giving an appealing roughness to the texture. West is careful never to make his electronic music too processed – there is a beating heart at all times, the combination of analogue and digital judged to near perfection.

The rough bass makes its presence known to best effect in Be Kind, complemented by a floating treble line. Rest – which is less settled than its title suggests it should be – also benefits from its presence. Yet the most striking tracks have almost no bass at all. I Think So throws out some dazzling shapes from the start, while Sun’s Abandon has even more kinetic energy, travelling at some speed above a frenetic rhythm. When the bass does intervene it is in the form of a slow drone.

In the second part of the album Rival Consoles’ music feels like a flickering flame, dancing lazily in Untravel and finally extinguished in Fragment. Hidden also starts in the half light, but as it progresses West turns the music on its head with a strong kick drum, introducing a powerful energy to bring the music from darkness to light, with a chord progression not unlike the big 1990s Grace hit Not Over Yet.

The sense of structure and colour West achieves on this album sets it a level above. The tracks may last between two and nine minutes, but each feels just the right length and not a moment more. Texturally there are pronounced in the direction of shoegaze but at the same time West enjoys using similar loops to classical minimalist composers, at the same time managing to steer clear of any copycat accusations.

By the end of Fragment, when the flame diminishes, West has us fully under his spell. It is the culmination of his most complete and intense album as Rival Consoles, a record on which he has clearly spent a good deal of time. It dances in all the right places, and in its human personality it moves between introversion and outward display, stillness and movement, positive and negative.

For body and mind, then, this is a powerfully affecting release, one that cements Rival Consoles as one of the brightest jewels in the heavily studded Erased Tapes crown.