Roachford – Twice In A Lifetime 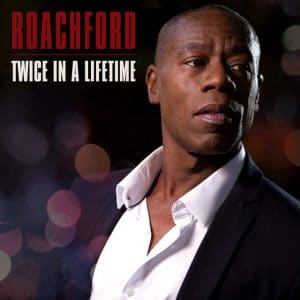 Andrew Roachford’s 11th solo album comes after a solo hiatus of seven years. In that time however he has issued plenty of reminders as to why he is one of British pop music’s hotter properties.

An unexpected but extremely fruitful move to Mike And The Mechanics as their vocalist returned him to the wider public consciousness in 2010, and arguably improved the scope and quality of their songwriting. Then the use of Cuddly Toy in the Alan Partridge vehicle Alpha Papa three years later reminded us of the durability of his earliest and biggest hit. Yet as keen followers of Roachford will know, he is much more than the sum of those parts (listen to Permanent Shade Of Blue and Feel from the 1990s if you haven’t already). Catchy though it is, Cuddly Toy is just the tip of a pretty big iceberg.

Twice In A Lifetime is a welcome burst of freshness for his return. There may not be anything startling in its midst, but it reinforces his credentials as a fine, emotive songwriter, and comes with a healthy side order of soul. The basslines have subtle, funky twists, the production is slick but not too clinical, and the horn sections have a subtle Motown swing, providing just the right amount of sharpness like a well-dressed salad.

Roachford also has a knack for a relevant lyric, shown in Once In A Lifetime’s capture of today’s climate and the need for love within it. “I’ve been drowning in a world full of madness,” goes the opening line of High On Love, “just drying to keep my head above the darkness.” Following this is the equally radio-friendly Love Remedy, another that starts in the doldrums. “My sky was turning cold and grey,” begins the first verse, but by the chorus “You came and saved me, girl, you’re a love remedy.”

Consistency is the word for the rest of the album, during which the singer bares his soul on songs like The Truth Hurts Too Much, Once In A Lifetime and Gonna Be The One. The last of this trio finds the singer in vulnerable territory, pondering that “If I saw you with someone else, I’d have only myself to blame”.

A duet with Beverley Knight, What We Had, is heartfelt and matches the two voices up rather nicely, Knight reining in a tendency to go for broke with harmonies that sound like a couple. “It’s just a storm we’ve gotta get through”, sings Roachford before the final chorus.

All too often since Cuddly Toy the sheer quality of Roachford’s songwriting has been taken for granted. While Mike And The Mechanics have benefited from his added craft and guile, the 13 songs here are heartfelt and expertly produced, for which Jimmy Hogarth should take credit.

The album ends on a positive note. “I’ve found you, and you’re the one,” he sings, bringing the emotional ups and downs of love and life to a positive end. It is a fitting way to end an album proving that, more than 30 years on, he remains one of the finest talents in British pop music. Roachford’s standards are high and the music (and voice) well above average – now all that’s needed is a bit more of the recognition he is due.

More on Roachford
Roachford – Twice In A Lifetime