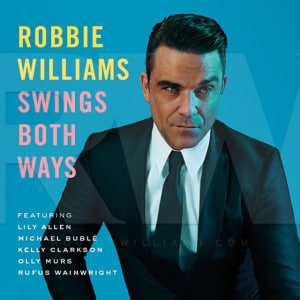 Robbie Williams swings both ways. No longer just a hopeful Google search term for those hungry for celebrity gossip, but also the title of the self-styled cheeky chappie’s latest album. As you’ve probably already guessed, the title refers to swing music rather than any bisexual leanings. On a completely unrelated note, this time Jonathan Wilkes is nowhere to be seen.

We have, of course, been here before. In 2001, Williams released Swing When You’re Winning, a surprisingly successful attempt to repackage the occasional Take That man as the new housewives’ favourite. The big sales of that album, and the emergence of Canadian crooner Michael Bublé, means that news of Swings Both Ways was no doubt greeted with much high-fiving and champagne cork-popping in the offices of Island Records.

There’s another big plus point on Swing Both Ways too – the name of Guy Chambers on the credits, for the first time since 2002’s Escapology. For unlike Swing When You’re Winning, which was entirely made up of old standards, there’s a fair amount of original material this time, and it’s a canny move by Williams to bring back his most successful collaborator to contribute.

Chambers’ involvement pays immediate dividends at the start of the album. Shine My Shoes is a stirring, brassy stomp with some knowingly self-referential lyrics, while Go Gentle is one of the best things Williams has done in years, being a touching ode to his baby daughter by dispensing fatherly advice about boys in nightclubs. It should be horrifically cheesy, but it’s so heartfelt that it becomes rather moving.

There’s plenty of guest stars too, from the expected (Lily Allen and the aforementioned Bublé) to some more surprising names, such as Rufus Wainwright and Kelly Clarkson. There’s also Olly Murs, who guests on the old Jungle Book classic I Wan’na Be Like You. Putting aside the sheer head-spinning meta-ness of a man who’s based his entire career on being a Robbie Williams impersonator singing “I want to be like you” to his hero, there’s also a disturbing amount of scat singing and unbearably matey cries of “I’m loving life, Rob”. Needless to say, it is absolutely dreadful and everyone involved in its creation should be utterly ashamed.

Wainwright fares far better on the title track, with the sound of Williams and Wainwright shamelessly flirting with each other being genuinely funny (“Face it Robbie… you’re a little bit gay”). The brass arrangement also sounds terrific, and if it’s ever released as a single, the video should be an absolute scream. Lily Allen also continues her career comeback on Dream A Little Dream, and her voice works really well with Williams, but whether anyone needs yet another version of that song is open to debate.

Indeed, that’s one of the main problems with Swing Both Ways. The original material is very good, and Williams sounds refreshed and revitalised to be working with Chambers again. Yet it’s dragged down by the predictable cover versions. For there is never any need, when we’ve nearly reached the year 2014, for faithful new versions of Minnie The Moocher or Puttin’ On The Ritz. The reworking of Williams’ old hit Supreme (retitled Swing Supreme on this album) is more successful, but again seems rather pointless given the excellence of the original.

Little Green Apples is a more inspired cover choice – it’s been covered many times, but Williams makes it sound like one of his own songs, and there’s also the welcome addition of Kelly Clarkson providing guest vocals. However, Swings Both Ways really takes off on the new original material, with the possible exception of the closing Nobody Likes A Fat Pop Star which threatens to fall apart under its own winking self-deprecation.

However, given that just a few years ago Williams was rapping on the truly terrible Rudebox, and then became a heavily bearded UFO hunter in California, it’s amazing that so much of Swings Both Ways works so well. It’s not an unqualified success, but it’s a guaranteed seller over Christmas. And, as one of this country’s more entertaining pop stars, it’s nice to have him back.