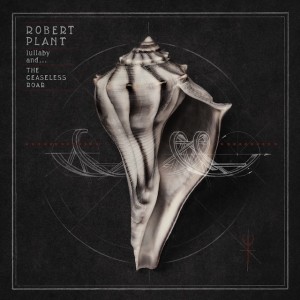 Supporting Emmylou Harris’ Wrecking Ball performance with a set of his own material at the Barbican back in May, Daniel Lanois somewhat guilelessly revealed that Robert Plant was in the audience, inviting him to join the band on stage “if it felt right”. Plant remained rooted to his seat but his presence at this particular show does not feel insignificant. Not only does the world fusion of Wrecking Ball (produced by Lanois), still heavily rooted in songcraft and interpretation, feel like a major influence on Plant’s 10th solo album, but lullaby and…The Ceaseless Roar also feels like a similar feat of late career regeneration.

This is not to suggest Plant has been slacking of course. Of all his contemporaries in the category of rock’s elder statesmen, he has perhaps been the most restless, for the most part shunning calls for a nostalgic tour round the world’s enormodomes with Led Zeppelin and instead following his digressive and curious ears. Brave artistic decisions resulted in a superb, justly popular collaboration with Alison Krauss on 2007’s Raising Sand and some intriguing choices in source material for 2010’s reconfiguration of Band Of Joy.

For Lullaby, Plant has returned to another of his former ensembles, formerly known as Strange Sensation and now reborn as The Sensational Shape Shifters. Original drummer Clive Deamer (also of recent Portishead and Radiohead live bands) has since been replaced by Dave Smith, another player with a contemporary jazz background (with Outhouse and Jim Hart amongst many other projects) who is also now something of an expert on approaches to North and West African music. His connection to Plant is through the outstanding ensemble Strange Sensation guitarist and key Plant foil Justin Adams assembled for his Juju collaboration with Gambian griot Juldeh Camara. Camara also joins Plant’s new band, adding some intriguing melodic lines and unusual textures on riti (a one string violin) and kologo (four string lute).

From the outset, it is clear that this is not a case of Plant retreading former glories, but rather something bold and new. Little Maggie might be an American folk song, but here it is gloriously recontextualised with a trance-like groove and an insistent lute and banjo riff. Like much of the music that follows it, Little Maggie is nomadic in approach and style, constantly shifting ground but in a way that is always respectful of its original melody. Plant’s voice, perhaps taking inspiration from his work with Krauss, is understated and distant, adding a sense of mystery and intrigue. Even more surprisingly, Little Maggie recurs at the album’s conclusion in the form of Arbaden (Maggie’s Babbie), a sort of dub plate version with vocal contributions from Camara, heavy bass presence and a plethora of studio effects.

The spirit of Lanois seems very much present in two of the album’s key tracks, the deep, empowering Rainbow (with a cymbal-less drum pattern that hints at Peter Gabriel) and the resplendent, shimmering House Of Love. The latter feels like a Roy Orbison song by way of Bob Dylan’s Series Of Dreams (another Lanois production). In both cases, Plant and Adams are unafraid of utilising the full resources of the recording studio, but in a way that always feels as if it is in service of the song.

This is significant too, as lullaby…showcases Plant’s songwriting, something that has been largely neglected on his most recent work (Dreamland and Band of Joy were both covers heavy). His lyrics achieve a finely nuanced balance of the candid and the oblique, often concerned with roots and rootlessness, and the complexity of matters of the heart. The crackling, agitated and neurotic Turn It Up (perhaps the closest thing in musical spirit to Whole Lotta Love here) relates Plant’s confusion and ‘statelessness’ whilst living in America (“I’m lost inside America and I’m turning inside out/I’m turning into someone else I heard so much about”). It’s hard not to see the wonderfully slow burning Embrace Another Fall, initially reflective but later tempestuous, as a pivotal track too, as it describes a disintegrating relationship that ‘brings me home again’. Crucially, as distorted guitars that seem derived from Low circa The Great Destroyer (another key Plant reference point), the track achieves an ecstasy to match its agony.

Elsewhere, Plant finds room for a direct Byrdsian pop song (Somebody There) and a beautiful, poignant and genuinely sincere ballad (A Stolen Kiss). Both of these tracks are elevated as much by Plant’s superb vocal performances as by the innovative and distinctive contributions of his musicians (A Stolen Kiss was built on an original idea from pianist John Baggott). The various streams of Plant’s thinking are brilliantly coalesced on the riveting, driving groove of Up On The Hollow Hill (Understanding Arthur). In addition to its oblique referencing of legends and mythology, this thrilling song captures something of Plant’s ongoing love affair with the English and Welsh countryside, to which he has now returned. These outstanding songs, imaginatively and intuitively balanced by clever production, cohere to form a serious work reflecting on landscape, memory, regret and the pull of our roots. It more than earns its somewhat portentous title.