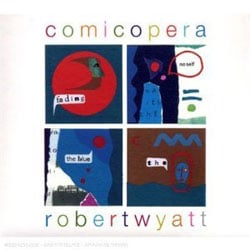 What will you be doing when you’re sixty-two? Now there’s a frightening thought…unless you’ve already reached the age of Robert Wyatt and know already. And if you have, you’ll be able to marvel more than most about his continued sharp state of musical and lyrical mind.

Comicopera misleads with its title, meaning the Greek definition of comedy as in ‘human foibles’. The opera bit rings true, however, as we find an album divided into three acts – Lost in Noise, The Here and The Now, and Away with the Fairies. Each section finds Wyatt indulging in a myriad of musical styles, with jazz the most prevalent.

Yet while the last section of the opera may outstay its welcome somewhat, this is an incredibly well fused and structured album that taps into a wide range of emotions. Wyatt remains clearly affected by the issues of the day, and in particular war. Such is the intensity of his feeling for the current crusades that he turns his back on Western language for the third part of the triptych.

His instrumentation, too, becomes fractured and confused. After Out Of The Blue paints a vivid portrait of a disappearing world Wyatt lets loose in Cancion De Julieta with a gathering of tremolo strings, followed by a complicated web of vibraphones in Pastafari.

The first two sections are tuneful, even contented at times. You You has a blissful awakening with its dreamy trumpet reminiscent of Autumn Leaves, while the intimacy of the solemn overture, Anja Garbarek‘s Stay Tuned, brings Wyatt and his band into the room with you.

Central to The Here And The Now, and indeed the whole album, is the brightly coloured On The Town Square, rich in steelpan, trumpet and saxophone, the latter rising euphorically to the top. It’s the emotional peak of the album, from which the record has trouble recovering.

Comicopera, then, is quite a journey, in the hands of an artist who, refreshingly for these event-hungry times, is not in a hurry. He makes you think, contemplate, rejoice and scowl. And for that we owe him.