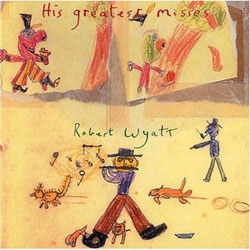 There couldn’t be a much more appropriate title for a Robert Wyatt compilation than His Greatest Misses. In over 40 years of steadfastly ploughing his own furrow, he’s only troubled the singles charts twice, and each time with a cover version: once with Neil Diamond‘s I’m A Believer and once with Elvis Costello‘s Shipbuilding.

Rumour has it that Wyatt was almost barred from performing the former on Top Of The Pops, on the grounds that the sight of a man in a wheelchair was “not suitable for family viewing” in 1974. But, to be fair, it’s not just prejudiced BBC executives who kept his work away from mainstream acceptance. Even in these more enlightened times, Wyatt’s high-pitched, weirdly compelling, muffled-trumpet-like voice still has the capacity to divide opinion strongly. As evidenced by the practice of “Wyatting” in busy London pubs – which involves putting one of his records on the jukebox in order to clear the room and nab one of the best tables for yourself.

Originally released in 2004 as an import-only CD, this compilation raises one big question about Wyatt’s work: is it possible to do justice to this extraordinary artist over a single disc? In a word, no. The 1994 retrospective, Going Back A Bit, took two discs of chronologically ordered songs to chart Wyatt’s development as an artist, with plenty of time for twists and turns around foreign language songs, cover versions and novelty numbers. The extended running time was just enough to give the casual listener an idea of what his work was all about.

His Greatest Misses is not only shorter, but jumps randomly back and forth between different periods of Wyatt’s career. It’s a pleasant trip down memory lane if you know the songs already; but it seems unlikely to make friends with newcomers – especially with an artist who pretty much defines the term “acquired taste”.

Also, Wyatt’s albums are self-contained works of art with distinct themes and soundscapes: and not really for dipping in and out of. As a result, the unaccustomed listener needs to hear at least three or four tracks back-to-back for the work to make sense. Call them jazz, call them prog-rock, call them what you will – but these are certainly not self-contained pop songs as we know them, and so the single-disc compilation simply doesn’t do them justice. It’s a bit like trying to assemble a jigsaw using a random selection of pieces from five or six different puzzles.

The songs themselves are, of course, marvellous; and probably as good a choice as you could wish to make – though, given the uncommerciality of Wyatt’s work, a random number generator could have made an equally worthy selection. Highlights include the two singles already mentioned, the peerless Sea Song from 1974’s Rock Bottom, and Heaps Of Sheeps from 1997’s Shleep, probably the best prose poem about insomnia ever written.

Best track here? On revisiting this material, it’s probably Free Will And Testament, also from Shleep, with its lazy slide guitar backing and poetic, philosophical lyrics: “So when I say that I know me, how can I know that? / What kind of spider understands arachnophobia? / I have my senses and my sense of having senses / Do I guide them, or they me?”