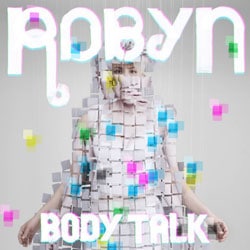 To say this has been Robyn’s year is an understatement. She’s filtered the Euro club-pop heritage and blasted it out across Body Talk Pt 1 and Pt 2. The third part of the trilogy slices five cuts from each and adds five more to tie the project off. This is a micro greatest hits from a phenomenal talent.

Having already pumped two albums out in a year, Body Talk is, in isolation, still spectacular. From the street stomp mantra of Don’t Fucking Tell Me What To Do that’s emblazoned with art school cynicism, through to the unadulterated love pains of new track Call Your Girlfriend, Robyn consistently summons a euphoria that is rained on and exacerbated by whimsy.

It always starts with the rhythms, even though Robyn’s eyes are cast firmly on melody as she plays with and tweaks the hypnotic, seductive synth loops. Robyn songs churn with electronic sumptuousness and will be peppered with playful vocal edits, but she’s going to break your heart as well. Hang With Me, much like monster hit With Every Heartbeat, screams sadness in its Giorgio Moroder-like arpeggios as she adds “If you keep it tight/I’ll confide in you” in a way that makes the word ‘tight’ grab and hold you. There’s a subtlety here that most big commercial pop can’t get its head around.

This isn’t to say Robyn can’t do sexy, aggressive or defensive. U Should Know Better sees her standing tall against Snoop Dogg‘s lazy magnificence. As Snoop ponders his cash and libido, Robyn ponders her cash with a happy conviction that she runs the planet, ultimately declaring “the Lord of Darkness himself knows better than to fuck with me”.

Sweden has long punched above its weight with music, but Robyn deserves a special spotlight. Swedish House Mafia are mangling early ’90s dance and setting it as the solid cornerstone of today’s UK pop-rap phenomenon; their sound is merely Robyn turned up with added oldskool sentiment. Production hype will come and go; Robyn knows when and how to associate with it, but then she leaves it behind.

She has done cuddly R&B and now she’s grown into a manga pop star. However the sound of today evolves, she’ll do it first and keep rolling. Body Talk shows just how easily she can churn out hits more frequently than labels can process production teams. Robyn deserves her success. As Body Talk (Part Three) ends with the lyrics “You and me together/Stars forever” to a bouncing house beat, it’s impossible to think of a better pop communicator for our time.