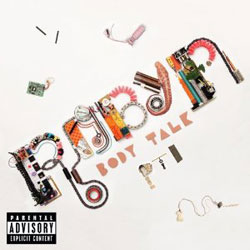 Whilst Christina Aguilera‘s recently released Bionic album suffers under the weight of its 18 tracks, Sweden’s Robin Carlsson, aka Robyn, offers up just eight tracks here. Body Talk Pt 1 is, as the name implies, the first part of what will eventually become a trilogy, with the two sequels both due this year. Rather than having all the material done and dusted, however, some of the songs are still being recorded, with release dates subject to change.

It’s this kind of risk-taking that has defined Robyn’s career since she emerged in 1996 with the global smash, Show Me Love. Bored with the music she was making, she promptly quit her label to set up her own. 2006’s self-titled album quickly re-established her as an international pop star, but on her own terms, displaying a desire for experimentation – production came from the likes of The Knife and Kleerup – but with the ability to create a classic melody still intact.

Body Talk Pt 1 does, therefore, arrive with the burden of expectation, not helped by the fact that four years is pretty much a lifetime in the world of pop. Yet there’s always been something childlike about Robyn, either manifesting itself through seemingly never ending enthusiasm or an almost bratty sense of discontent. On Don’t Fucking Tell Me What To Do she lists things that annoy her – “My boss is killing me… My drinking is killing me”, &C. – whilst on None Of Dem she’s bored and frustrated with a small town mentality, like a teenager cooped up indoors waiting to move to the big city.

As fun as Don’t Fucking Tell Me What To Do is, the album only really hits its stride with the glorious Fembot, a futuristic imagining of the female form. Though the lyrics are daft – “I’ve got some news for you/ Fembots have feelings too” – it’s exuberance and general sense of fun is so infectious that when the chorus kicks in you barely notice what she’s saying.

The futuristic folly of Fembot is swiftly grounded by the heart-bursting first single, Dancing On My Own. Musically, there’s nothing more than a simple metronomic tattoo tapping out a heartbeat, and as Robyn’s heartbreak at seeing a former beau with another woman increases, so does the speed of the beat. Midway through, everything drops out, leaving a desolate Robyn to croon, “So far away but still so near… I just came to say goodbye”, before the beat erupts like a machine gun, leaving you gobsmacked.

Equally brilliant is Cry When You Get Older, a sleek slice of electro relationship advice, Robyn trying to pass on pearls of wisdom to the young kids she sees in clubs and on the train. As ever, it comes with a huge, sky-scraping chorus that manages to sound uplifting even when it’s talking about how painful love can be. Equally, the fragile, piano-led Hang With Me may seem desolate but its message is clear; treat me nicely and I’ll reciprocate. In one couplet, it manages to sum up the differences in the way men and women approach relationships: “I know what’s on your mind / There will be time for that too / If you hang with me”.

Elsewhere, big name producers Diplo and R�yksopp deliver the cod-dancehall ragga of Dancehall Queen (the title a neat reference to her Swedish pop roots) and the booming, pulsating None Of Dem, respectively. It ends with a traditional Swedish song, Jag Vet En Dejlig Rosa, backed only by a distant keyboard. Originally performed during a concert in support of victims of the tsunami, it’s a lovely way to close an album that started with sweary petulance.

This baring of every emotion – be it childish or heartfelt – is what makes Robyn such an interesting proposition. Simultaneously walking the line between mainstream star and tastemaker, her recent career has seen her create some of the best pop singles of the century so far. With Body Talk Pt 1 she’s ready to finally take her place at pop’s top table of greats. For once, the sequel can’t some soon enough.