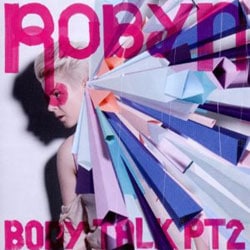 Putting out three albums in the span of six months is almost stupidlyambitious. Robyn’s three-part Body Talk series began in June with BodyTalk Pt 1, with a promise of two more ‘mini albums’ to follow. Against all odds it looks like the blonde bombshell might pull it off. Body Talk Pt 2arrives in September, which gives her three months to come through on her promise of Pt 3.

According to Robyn, the concept for the Body Talk trajectory emerged from having a heap of songs from sessions over the past fiveyears. The cream of these were introduced on Pt 1, centred aroundsoon-to-be-classic bangers Dancing On My Own and Fembot. It was aremarkably taut record for eight songs, something that sounded like aparticularly well-stuck-together greatest hits compilation.

Pt 2doesn’t have the same feel; it’s as if Robyn may have exhausted her supplyof great songs too soon. It has its moments, but in general justdoesn’t compare to Pt 1. But hat doesn’t mean it’s bad; it’s still made of thesame lovable, danceable ingredients that has made Robyn such a perfectpop star over the past decade, and anything remotely in thatballpark is going to be at the very least listenable.

In My Eyes andInclude Me Out open the album with a double-shot of carbonatedelectropop goodness that’s sure to get a dancefloor moving; they falla little on the safe side in comparison to cuts like Don’t FuckingTell Me What To Do or Fembot, but compared to the rest of the poplandscape, they hold up pretty well. Even when Robyn isn’t at herbest, she’s still a force to be reckoned with.

Most of Body Talk Pt 2 is more of the same, but Robyn doesoccasionally take some significant risks. U Should Know Better has thethoroughly Scandinavian songstress trading verses with none other thanSnoop Dog, and she holds her own – chirping out her ownsing-songy flow like a profanity-laden school ground chant. We DanceTo The Beat takes Robyn out of the equation entirely, and puts theentire focus of the song on, naturally, the beat – only occasionallyinterrupting the chugging, synth-spiked dubstep with a fewmeaningless (but effective) statements: “Dance to the beat ofsilent mutation, we dance to the beat of your brain not falling fastenough, we dance to the beat of raw talent wasted.” These momentsaren’t Pt 2’s strongest, but they definitely show anotherside of Robyn than what was evident on her other records.

Weirdly, Body Talk Pt 2 mirrors its predecessor in somequestionably blatant ways. Dancing On My Own, the centrepiece of thelast album, is a shuttering, lovelorn, insecure confessional set todance music. Hang With Me, the centerpiece of this album, is also ashuttering, lovelorn, insecure confessional set to dance music, andboth eerily come three tracks in – the only difference really being ishow much better a song Dancing On My Own is.

Both albums end withtheir sole un-electrified tracks Jag Vet En Dejlig Rosa andIndestructible (Acoustic Version) – once again, with the selectionfrom Pt 1 exceeding in quality. It sums up a theme that seems toplague Body Talk Pt 2 to its core – the record turns the same tricksas its prequel, but never quite captures the same glory. It’s moreelectro-by-numbers and less moments of first-time euphoria.