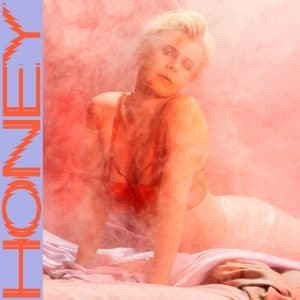 She’s somehow still not a household name, but Robyn‘s brand of brushed-chrome, Scandinavian pop has infiltrated every chart in the world – either directly, from her own wildly diverse, endlessly fantastic catalogue, or indirectly via the litany of artists that have liberally borrowed from her style. Hell, you could chalk up a significant percentage of the Top 40 in the past 10 years to her influence.

Rihanna? Sia? Madonna? They’ve all had Robyn-ized singles, albums or both. She’s influenced the full gamut of modern popstars, directly or otherwise. Would that gleaming, Scandi-pop influence have even been a thing without her? Unlikely. Taylor Swift‘s monolithic 1989? Scandinavian as ABBA, polished as an IKEA glass cabinet.

Anyway, all of this is, unfortunately, irrelevant if her new releases need to be taken seriously. Her new record – her first in the near-decade since Body Talk – must be viewed without the baggage of history or nostalgia. The good news is that it’s often great, frequently excellent and uniformly pristine. There isn’t a hook, chorus or beat out of place. It feels like a statement. It feels considered. Where many albums feel like singles with a few complementary fillers, Honey sounds cohesive, and you can tell you’re dealing with the real thing.

Honey is heart-on-sleeve, open-book emotional without being draining, like a Disintegration or a Blackstar: it’s heavy on the mind but light on the ears. It seems perfectly handmade for each listener, but never makes you feel isolated. It’s like your pass into a world of shining surfaces, neon lights and heartbreak.

Across the record, there are hints of Robyn’s own influences. There’s a whiff of Kate Bush in some of the synth sounds. There’s a blush of New Order in the grooves. There are also call-backs to some of her most famous songs (try and find those Easter Eggs for yourself).

There’s some raw, elemental disco in Because It’s In The Music. There’s a dose of deep, throbbing house in Baby Forgive Me – featuring a disembodied robot voice not unlike Ross’ attempt at synth-pop weirdness in Friends. Send To Robyn Immediately is another highlight. Well, in truth, they’re all highlights. They all fit the concept. They all further the cause. Robyn and her collaborators successfully transcend the medium, and push the record into the realms of capital ‘A’ Art.

Robyn’s music has always, in a strange way, been reminiscent of Matisse’s collages. It’s about clean lines, geometric beauty and clear sincerity. But it also has depth, richness and luxurious colour. It can be taken as superficially perfect pop music, or you can listen a little deeper and hear just how intricately woven her heartbreak anthems really are. She is an artist in the truest sense. And Honey is her latest masterpiece.