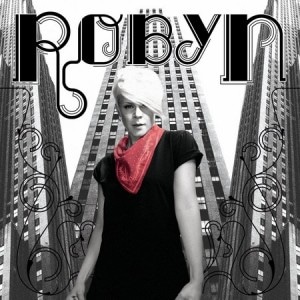 The world of music listeners falls into two camps. On the one hand there are those who have never heard of Sweden’s petite blonde bombshell Robyn. Then there are gay men, fans of The Knife and/or Basement Jaxx and people in Sweden who have. She used to be signed to a major. She had a UK Top 10 single with Show Me Love. That was then. Now, Robyn is her own label boss and has brought DIY music making to an area of the industry not known for it.

As seems to be the case these days, people in Sweden get to hear good Swedish music months before the rest of us. Robyn, the album, has been available in her native Stockholm since 2005. As with The Knife, who license their music from their own Rabid Records, Robyn has gone down the self-released indie route, foregoing the majors and indies alike in favour of total artistic control of her output. Having bought herself off her former label (Sony BMG’s Jive division), she needed this record to work. Having dipped a toe in the UK market with her vocals on Basement Jaxx’s Hey U, the scene was set. All she needed to do was step up to the plate, in boxing parlance.

So it is that she’s taken her time at crafting an album of quality that sounds thoroughly up-to-date and that looks set to stand testing against the best pop any of the majors can throw in her way this year. Opening with a declaration of intent so ballsy it’ll have rappers running for cover, called Curriculum Vitae, Robyn provides a boxing match style catch-up for anyone needing to know who she is. “She split the atom, invented the x-ray, the cure for Aids… the most decorated field operative in the industry…” and on it goes. Tongue in cheek, certainly, but there’s more than a hint of truth running through the outlandish statements. This is Robyn bigging herself up to cartoon-sized pop star proportions.

What follows is a solid pop gem of a record, at least half of which deserves to be released as singles. Konichiwa Bitches continues with the bigging-up, laced with some grin-inducing sound effects and laugh-out-loud lyrical turns (watch out for how she gets into her jeans). Cobrastyle, Be Mine! and Handle Me are all catchy enough to stand on their own as singles too, while Crash And Burn Girl’s big ballsy synth bass gloriously underpins Robyn’s coy whispering.

Karin and Olof, aka The Knife, penned Who’s That Girl, a slice of electropop perfection that sounds nothing like the Madonna track of the same name. The beats and synth sounds are unmistakably The Knife’s – had it not been for Robyn’s vocal line this would have been at home on Deep Cuts. Robyn refers to it as The First Robyn Song, and it’s a good one, but before it is the album’s highlight With Every Heartbeat. A string quartet is integral to it, not tacked on like strings often are in pop. Here the strings complement the upbeat synths and Robyn’s refrain of “and it hurts with every heartbeat”. It lacks a big bang conclusion, but it makes up for it with originality and a sense of the unexpected – a rarity in pop, that.

The big numbers out of the way, the latter part of the album does sag a little. Robotboy isn’t on a par with what went before, despite cutesy lyrics designed to appeal to her fans, while Eclipse is the quietest, balladesque moment. Should Have Known continues the downbeat ending into the womb-like Anytime You Like. These three tracks live would form an underwhelming encore, but they’re saved by what went before, and the variation of tempo and instrumentation is at least welcome and suggestive of Robyn’s willingness to head in whatever direction suits each song.

So, well into her 30s, Robyn has assured her contemporaries that pop life does not end as a tweenie, that pop music can be for adults, and that adults can be Do It Yourself indie artists, so long as one thing is in place: talent. Happily for Robyn, she has it to spare.