Roddy Woomble – My Secret Is My Silence 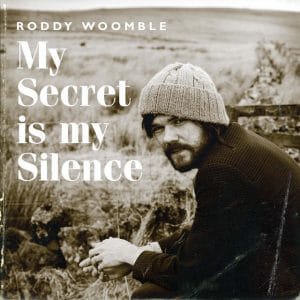 An air of the inevitable accompanied this record into your reviewer’s abode, sending him into a realm of musing that threw up many questions about a writer’s impetus. What is it that takes an artist backwards in time? Old fashioned sentimentality, yes, but surely it’s the emotion of heritage it can bestow on the work of the truly soulful that ultimately points the way.

As Roddy Woomble‘s indie rock band Idlewild grew over the years, it was always apparent that the path they were taking was that of the true musical troubadours, backwards into effortless soul and melody rather than onwards to more egotistic grounds.

At the beginning Idlewild were a thrilling concoction of angular guitar fury and intelligence, debut LP 100 Broken Windows strewn with infectious blasts of adrenalised emotional ingenuity which Woomble rendered with the kind of direction that made it compulsive listening. Perhaps reaching their purest pop perfection in last year’s Warnings/Promises (in particular with a leading track, Love Will Steal Us From Loneliness, that cinematic shimmer lent itself perfectly to the Une Femme est une Femme-era Godard stylings of the video promo), it’s now onwards and backwards into a realm of lineage and roots.

On My Secret Is My Silence there’s a tangible sense of a man moving further towards his literary and intellectual influences, and of course home. Woomble has always waxed lyrical about the likes of Scottish poets Robert Frost and George Mackay Brown, and he has spoken of this LP being about the “spaces between words, the language of silence, which is something you see a lot of in Scotland, particularly with the older people up in the highlands.”

In building the final bridges from folk-tinged indie-rock to a consummate pastoral sound, Woomble has availed himself of a Who’s Who of the current folk hierarchy, yet the record sounds like the talented retinue are being taken for the ride of their lives. The distinguished players obviously have a healthy respect for one of our most underrated indie songwriters, and a certain appreciation for his genuine route into their musical world.

British folk princess Kate Rusby‘s voice is the perfect embellishment to any record, even making Ronan Keating sound passable in a single he put out in June, and within Woomble’s new rural framework her borderline vocal contribution sounds nothing less than subtly breathtaking, the warmth of the two voices combining to truly special effect.

A great tribute to Woomble is that he’s one of the few voices you wouldn’t want to get out of the way in favour of Rusby taking a more robust vocal lead. Though his Idlewild pals have been tempered enough by Woomble’s increasingly serene vision over the last few years, working with an accomplished folk musician like John McCusker seems like a pretty essential progression towards the sound purveyed here, and McCusker’s violin melodies in As Still As I Watch Your Grave and the title track provide a noticeable bridge from what would be quintessential modern Idlewild to a unique brand of alt-folk.

Borders-based singer/songwriter Karine Polwart released an acclaimed album of her own a few weeks back, and though, like Rusby, herself an artist of genuine stature and inspiration, she similarly benefits from Woomble’s rambling vision, the lush duet on the title track being one of the particular highlights of this LP.

There’s something about folk music that lends itself to a truly evocative female voice, and the moments of highest grace here are perhaps the ones Woomble shares with Rusby and Polwart. Rusby of course has that useful knack of unassumingly shooting a song off up to the stars, and this is achieved here not once but three times, on the elegiac opener I Came In From The Mountains, the beautifully filmic Act IV, and perhaps most memorably on the more bona fide duet of Waverley Steps, where her unique, tear-stained vocal hits a mark that’s blindingly poignant.

Woomble has always had the kind of rare ease with his material that’s a hallmark of a great artist, whatever the genre. Whether with his band Idlewild or here on a solo release, the essence of him as a current songwriter is a sparkling cinematic romanticism, distilled into ever more sprawling shapes. After years of descent, it seems he’s truly arrived at the top of his mountain.