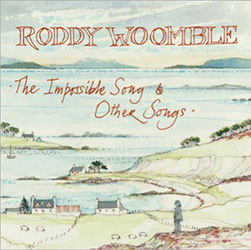 It’s strange how Idlewild were, at a time many moons yonder, considered to be a bright, young, promising prospect for UK indie. A decade later and their time has almost come and gone. The Scottish band’s popularity never really recaptured the dizzying heights of 2002, where they scored a Top 10 single with You Held The World In Your Arms. They’re currently on a recording hiatus, and it’s difficult to see a time when it’ll end.

But this hiatus isn’t stopping Roddy Woomble from being busy. He’s already released a couple of albums under his own name: his 2006 debut My Secret Is My Silence and a 2008 collaboration with Kris Drever and John McClusker called Before The Ruin. Last year he relocated temporarily to the Isle Of Mull to get down to work on his second outright solo record, which he admitted was something he hadn’t planned to do.

The Impossible Song & Other Songs displays flashes of influences from other genres but it is primarily a folk-driven album. Despite toying with brass (the jaunty Roll Along), piano (enchanting closer Between The Old Moon and the warm-sounding Tangled Wire) and other instruments there is no track on here that doesn’t sound like it was originally written on the acoustic guitar. It could very easily have become a record consisting of just himself; the very definition of ‘going it alone’.

Instead of doing it by himself though, he’s joined by a supporting cast of artists from a wide range of backgrounds. Singer Sorren MacLean, Gavin Fox (formerly of Idlewild) and Gregor Donaldson (from Sparrow & The Workshop) join him to bulk up the sound when required as his main backing band. Jazz pianist Chick Lyall, saxophonist Rob Hall, fiddler Aidian O’Rourke, accordion player Phil Cunningham and Dundonian songwriter Michael Marra also join them occasionally but, even though there is much competent musicianship on show, it’s the main star that remains centre stage; his wistful and poetic way with words alongside his distinctive voice staying at the forefront of the mix.

The problem is that, despite the fact that this is not all necessarily single-minded in its pacing, not a lot of it is particularly inspiring. It’s especially disappointing that the results aren’t stellar when you consider the vast array of talent that is collaborating with him. A New Day Has Begun, the opening song, has purpose and intent behind it but this is not followed through for the following 45 minutes. Tunes such as New Frontier and Leaving Without Gold could have so much more character to them but instead they sound familiar and unexciting. Even lyrically, whilst vivid and striking, it feels like a re-treading of past work.

Ultimately, The Impossible Song & Other Songs is difficult to completely dislike, but there’s not much to grab attention. To say this is a middle-of-the-road effort would be harsh – Woomble obviously has good songwriting chops – but this collection of tracks lacks that vibrancy and spark needed to linger long in the memory. There are a few sunny moments here and there, but ultimately it’s disappointingly flat.