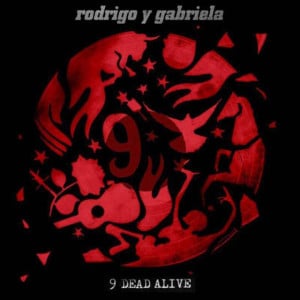 Famed for their dextrous digits and finger-tut finicky fret freneticisms, Mexican twosome Rodrigo y Gabriela are two of the world’s most impressive guitarists. Performing ‘fusions’ as opposed to any pigeonhole-y style, their music flits between jazz, flamenco, Latin pop, heavy metal and rock. The latter two are what make up the majority of the ideas behind 9 Dead Alive, their fourth studio LP.

Centred around eight historical icons (and also nature), the nine tracks here have a strident theme: “each track is a personal celebration of individuals who have passed on, but through their deeds and words still resonate in the 21st century,” the pair stated on Twitter. As such, each cut on 9 Dead Alive (that title suddenly makes a lot more sense), is dedicated to figures ranging from literary deity Fyodor Dostoevsky to abolitionist and suffragette Harriet Tubman. It’s a noble, if wildly ambitious, task they’ve undertaken here – not only is composing music not necessarily an easy feat, but in attempting to create something that either embodies a person’s spirit or pays effective (and affective) tribute with aplomb and taste, they’ve set themselves a Herculean task.

Misty Moses, the tribute to Tubman, explores Rodrigo y Gabriela’s metal roots. Akin to acoustic Metallica, they employ virtuosic riffery (natch), and arm-flail soloing, veering away from the Hispanic ventures they’ve found most fame with, such as Tamacun. This is atmospheric, organic metal music – somehow, it retains bite. There’s a heroism, a triumph to the music, which is supposedly how Tubman and her strength shine through the frantic plucking. Somnium careens back towards the Latin side of their skillset. Dedicated to revered Mexican poet Sor Juana Inés de la Cruz, the duo utilise their rhythmic talents to craft a tune many will consider ‘Golden Age’ Rodrigo y Gabriela. It’s straight up guitar insanity, kindling visions of barren deserts, duelling scorpions and the kind of aural mischief that we expect from the axesmiths.

It’s not all fun and games, sadly. Sunday Neurosis (dedicated to physicist Viktor Frankl), while thoroughly impressive guitar fare – all bustling chords and pensive licks – betrays the heart of what we, and indeed many others, adore about the act. Shoehorned in are jerky vocal samples, glaring over the top of the nylon soundscapes. It’s perhaps a petty niggle, but one that lurches you from the hypnotic throbbing of Gabriela’s strumming patterns and Rodrigo’s fantastical melodics. It breaks the suspension of reality that they are so adroit at sculpting with mere instruments.

It’s an interesting concept for an album that Rodrigo y Gabriela have concocted. It’s completed with tact and guile, for the most part, but due to the instrumental nature of their music, unless you’re prewarned of the ideas behind the sound, it’s nigh-on impossible to decipher the sonic epitaphs they weave. It’s not a major issue, as with all of the current arsenal, it’s fantabulous guitar mastery that’s both impressive to behold and marvellous to hear. Without leaning on the concept, this record fleshes out their roots and the mythic origins. Steeped in traditional rock and metal conventions, it’s not an entirely fresh timbre, but it’s a sideways evolution that expands upon the pair’s already vibrant repertoire.

There’s nothing as immediate as Ixtapa or Tamacun here, but there’s plenty of well rounded paeans nonetheless, and you’re sure to find something to adore if you’re a fan of guitar music, Latin music or heavy metal. So throw up the horns and rejoice, for Rodrigo y Gabriela are back with a poignant vengeance.