by Christopher Monk
published: 12 May 2015 in Album Reviews
Tweet 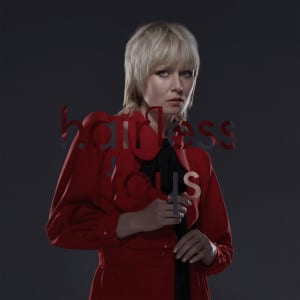 Murphy’s new album – the superbly-titled Hairless Toys – is Overpowered’s long-awaited follow-up and a very different album to its predecessor. It’s a grower, not a shower. Recorded with former Freakpower member Eddie Stevens, it’s less interested in snagging listeners’ ears with catchy hooks or luring them on to the dancefloor, and more interested in building a strange, compelling atmosphere. Good luck to anyone trying to glean a hit single from its eight long tracks.

But then Murphy has never given the impression of being particularly concerned with commercial success. Overpowered is an anomaly in her 20-year career. Murphy’s first solo record – 2005’s Ruby Blue – was an odd collaboration with Matthew Herbert – an experimental producer who once released an album which sampled the sounds of an abattoir. Murphy’s previous band Moloko might have scored two big hit singles (Sing It Back and The Time Is Now), but those singles were plucked from frequently-difficult albums. (Lest we forget, one of The Time Is Now’s follow-ups was Indigo, a single whose chorus comprised a distorted Murphy barking the words “Rameses, Colossus!”.)

Long-time Murphy followers are therefore unlikely to be phased by Hairless Toys. The album plays its oddest card at the beginning: Gone Fishing, on which Murphy sings a queer, elusive melody over an arrangement that starts in minimalistic fashion before becoming hallucinogenic. Evil Eyes and Exploitation both resemble Overpowered numbers that have been stretched out, becoming warped in the process. The latter track runs for over nine minutes, but never bores as little details keep being added: scuttling percussion, Nile Rodgers-esque guitar, atonal piano stabs.

Exile is a country-soul number that’s without precedent in Murphy’s back catalogue. House Of Glass nods to deep house but it’s uninterested in luring listeners to their feet. Hairless Toys (Gotta Hurt) is a lovely ballad boasting one of Murphy’s most indelible melodies, while closer Unputdownable seems as if it’s going to end the album on a downer, before it transforms into something quite uplifting. Best of all is Uninvited Guest, which struts along funkily like Herbie Hancock’s Chameleon while somehow incorporating a wonderfully beatific middle eight.

Overpowered ought to have been the making of Murphy, but went no higher than Number 20 in the UK albums chart. Hairless Toys will probably make even less of a commercial impact, yet the fact that Murphy is able to sell out London’s Roundhouse having not released an album for eight years is testament to her immense talent and charisma. Both qualities are on ample display on Hairless Toys.