Rolo Tomassi – Time Will Die And Love Will Bury It 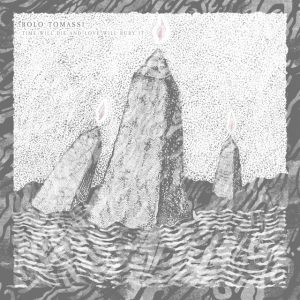 There’s a video of a young Rolo Tomassi on YouTube, posted by original bassist Joseph Thorpe. Set up in a corner of a Soho vintage emporium, hemmed in by accessories, they launch into Fofteen, from then unreleased debut Hysterics, and, for a moment, it’s like all hell broke loose among the handbags.

Bruisingly heavy, convulsively jazzy, full of dramatic, lurching left-turns and time-signature shifts, the Sheffield five-piece’s frenetic progressive hardcore is capped off by vocalist Eva Spence – the sister of keyboard player and co-vocalist James – whose voice switches from one moment to the next between soft and seraphic and throat-shredding howl.

A lot of Hysterics (2008) followed similar patterns – one of the album’s most popular tracks was the thrilling, skewiff mathcore of I Love Turbulence, and the title alone indicates a wide-eyed excitement at drama and danger, noise and velocity. They might not be for everyone, but for fans – displaying a devotion so often seen with such singular, fiercely independent bands – every album Rolo Tomassi have released since has remained utterly aligned to the uncompromising sound of the first, while stretching their sound’s horizons, and broadening its scope.

Second album Cosmology brought Diplo onboard to produce – then fresh from his work with Drake, M.I.A. and Santigold – and was a more focused set, featuring the actually-pretty-catchy Party Wounds, along with the mournful, prog-leaning Kasia. That sense of setting new boundaries and expanding parameters continued through 2012’s Astraea, recorded after the arrival of Chris Cayford and Brontide’s Nathan Fairweather on guitar and bass respectively, culminating in the dark, tempestuous Grievances (2015). To date, it was the band’s definitive statement; glorious, sprawling and oppressive, with equal measures of maturity and melancholy, while still displaying their trademark polyrhythmic complexity and devastating precision.

“This time around,” James told Noisey late last year, “we focused specifically on exploring songs … to their full potential”, adding that they wanted “to write mini-epics”. A mini-epic in itself, Time Will Die And Love Will Bury It (borrowed from a poem by Richard Brautigan) is their first album title to buck the single-word trend. This might seem incidental, but it suggests Rolo Tomassi are taking their expansive approach even further than before. The first two tracks confirm this.

With wordless washes and Frippertronic reverse-tape squiggles, Towards Dawn suggests a calm before the storm, an ethereal palate-cleanser. But what follows, in Aftermath, is the band’s warmest (“Don’t blame all that is lost/We revive ourselves”), most plainly beauteous song to date. The stop-start verses are still there, but Spence sings throughout – gently, urgently – guitars chime, and the chorus is affecting and hopeful.

If this all sounds as though they’ve strayed too far, Rituals – brought along by Cayford during a brief lacuna in the writing process – features the welcome return of riffs like metallic slabs balanced on top of one another at awkward angles, huge minor-key synth parts which construct cathedral walls of sound as quickly as they knock them down, and blast-beat drums by Tom Pitts which recall the bleak, spiralling intensity of black metal.

What follows maintains both the high standard and the mixture of shades and textures: The Hollow Hour and A Flood Of Light are 7- and 8-minute epics, where fearsome clouds occasionally part for echoing, circular piano parts and ambient synth washes, while Balancing The Dark marries literal and lyrical opacity to skittering, jazz-inflected drum and organ lines. Alma Mater and Whispers Among Us use vocal harmony as an additional weapon in the sonic arsenal, and – among the best things they’ve recorded – Contretemps opens with a piano part which evokes the same reflective mood as Aphex Twin’s Avril 14th, shifting via driving, insistent synths and toms to a redemptive, almost cleansing noise; wholly uncompromised, but with a beauty all its own.

After going to some very dark places, the post-rocking, plaintive Risen ends the album – standing alongside Grievances as the band’s masterpiece – with a tone of making peace, “consoled and consumed” by “gentle reminders”. “I just want us to make genuinely honest music that isn’t for everyone,” James told Kerrang! last month; “but I want the people that it is for to fucking love it.” They will.