by John Murphy
published: 1 May 2021 in Album Reviews
Tweet 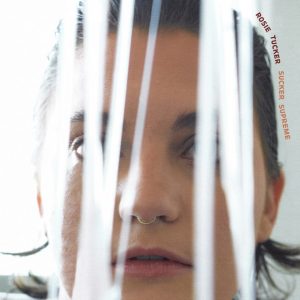 Sucker Supreme is Rosie Tucker‘s third album, and has the air of something of a defining statement about it. Tucker identifies as non-binary and their music is suitably fluid as well – genre-hopping, tricky to pigeonhole and switching from big and muscular one minute to a soft, fragile whisper the next.

This is Tucker’s debut on Epitaph Records, but despite that label’s fame for hardcore and punk bands, Tucker hasn’t changed their style too much. Instead, there’s an extra swagger that comes with experience. Opening track Barbara Ann isn’t a cover of the Beach Boys classic, but a crunchy ode to Tucker’s grandmother with a memorable chorus of “don’t fuck around with a Louisville slugger under your bed”.

Ambrosia is more low-key but equally affecting, managing to compare the titular salad (“dish of the Gods”) to lust and desire – “I want you more with every second than I ever did” Tucker sings with a palpable air of longing. The cover of Jeffrey Lewis‘ Arrow is even better, a sing-song melody delivered in the manner of early Liz Phair that builds and builds with a steady intensity.

Tucker has a real knack for conjuring up some startling imagery in their lyrics. For Sale Ford Pinto opens with a line about “Wolfy watching car wrecks on the internet, it’s hard to look away” before taking a turn into existential ennui (“So fucked I swear nothing matters… doing my best to make the most of my minutes, diminishing in a garbage world”). Dog is more low-key, with a creeping bass line that develops into a subtly haunting melody. There’s even a turn into lo-fi, which again brings to mind the Exile In Guyville-era of Liz Phair, a 90 second acoustic-accompanied lament about “shaving my legs for the first time in ages”.

Tucker has obviously decided that brevity is the way to go with Sucker Supreme. Although there are 14 tracks on the album, there’s not one song over four minutes and there are even a couple of number which last less than a minute. Sometimes, these are sharply effective – the big breath of fresh air that Brand New Beast sounds like – while other times, it seems like experimentation for its own sake: the closing How Was It is simply 75 seconds of audio cut-ups and glitches.

Yet mostly throughout Sucker Supreme, Tucker proves to be an expert at letting pent-up emotion flow. Habanero continues the album’s penchant for using food as an analogy for love, by taking the title’s hot pepper and using lines like “I need to see you sweat… you’re so hot it’s embarrassing”. It should sound horrendously cheesy but instead sounds impossibly endearing.

Sometimes, Sucker Supreme sounds deliberately obtuse – the angular Airport begins with the arresting line of “my girl is an airport, Plexiglas police state” – while at other times, the sadness sounds nearly overwhelming: take the beautiful Peach Pit which treads similar emotional ground as the likes of The Antlers with its guitars building up an increasingly hypnotic wall of sound.

Sucker Supreme is one of those albums where you find new things to discover all the time, and a record that confirms Tucker’s trajectory as one of the most interesting songwriters out there.