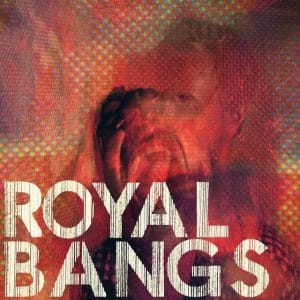 We Breed Champions came out last year in their native US but, like Barack Obama descending upon Stansted airport in Air Force One, Royal Bangs‘ debut album touches down in limey land right about now.

New Scissors kicks the album off with the quirky, perky indie-pop stylings that will become familiar over the next 10 songs. A girl and boy sing together on this twee Tennessee tune, but psychedelic effects on some of the vocals reveal the bands’ interest in electronic experimentation. The ‘boy’ is lead vocalist Ryan Schaefer, sounding not unlike Weezer‘s Rivers Cuomo.

In the first departure from bright and breezy, Handcuff Killa sweeps in all bleeps and dull thuds. Pretty guitar licks keep us this side of indie but a driving, hypnotic beat make this the clear crossover track.

Japanese Cars is strange, glitchy and haunting. Royal Bangs have been compared to a happier, less strapped-in Radiohead, and this song boasts glimpses of why. Schaefer’s voice is completely unobscured for the first time and it is lovely.

We’re back on less tremulous ground with Let’s Get Even, an immediate garage stomp-along, driven by an assured, rolling bassline. Stuttery glitches and space invader noises pop up in the middle, weaving into a gentle piano refrain, continuing that Radiohead comparison with a tiny touch of Idioteque.

Next song Brother is messy, sexy and riffy. This will be the one the mosh pit forms for. Schaefer often sounds like he’s singing at the top of his register, and all the better for it. You can really hear him trying, and the enthusiasm is catching.

Broke Calculator wants to be Blue Monday for just one second, but is actually a mid-pace, major key, slacker indie paean to a broken calculator. In place of a noodly guitar solo is Stephen Spielberg’s Close Encounter alien giggling hysterically at the tail-end of an awesome acid trip in the sunshine.

Russia Goodbye begins with as close as we get to bombast. Rock posturing begins to morph into a sloppily assembled indie anthem, but soon the chorus hits and its frantic, joyous, noisy business as usual. Schaefer’s voice is so deeply layered amongst the effects that it’s basically an affected noise.

Little Switzerland starts like The Kinks‘ You Really Got Me but some noodling and well-placed ‘woohs!’ give it flavour of its own ’til the lyrics kick in. Schaefer is unobscured again, sounding at his most Rivers Cuomo like. Believe me, that is praise indeed. The song itself is Weezer-ish, with all of the youth, yearning, earnestness and melodious pop splendour that implies.

Continuing the inexplicable Asian cars theme, Hyundai from Korea fades in with a military band pulsating rhythm and a multitude of voices providing a vocal to rival the The Polyphonic Spree for simplistic bliss.

The exuberance of this album befits the first flush of spring. Their live show is reported to look like a fight in a wire factory; it’s easy to picture the five of them lugging a music tech’s dream/roadie’s nightmare around the festival circuit. The festival circuit will be a better place if they do just that.