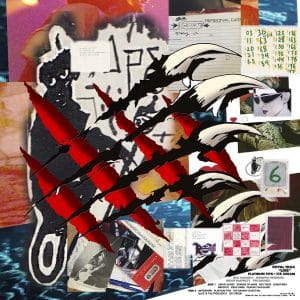 Over the course of their career, Royal Trux has taken the standard rock band narrative and turned it into their own twisted version. From their earliest days as a duo backed by a cranky tape machine, through their weird experimental phase, onwards onto their sellout years with Virgin, and their return to their more independent roots they’ve always managed to sound entirely as they’ve wanted. They’ve taken elements of ’60s rock and blues, ’70s metal, ’80s goth, and ’90s grunge, and turned these elements into something that is undeniably entirely their own.

These days the usual narrative of any band that’s been around long enough is the inevitable post-spilt/post-hiatus reformation. Naturally Royal Trux are exploring the possibilities of the usual rock ‘n’ roll story, and Platinum Tips + Ice Cream, the band’s first new material in 17 years pushes at what we’d expect from a band returning from the fray. Neil Hagerty and Jennifer Herrema first reunited for a festival back in 2015, as is the way of things these days. So it makes some kind of sense that this album is essentially a grab bag of old material played live and raw at two shows, one in New York and another in LA. Apparently unrehearsed, this is the sound of a band living in the moment and flying by the seat of their pants. This raw edge to the recordings and the performance is perhaps the most realistic representation of the band to date. When you looked at pictures of the pair in their heyday, this is how you would have expected them to sound – ramshackle, focused, thrilling and rough as fuck.

Perhaps ramshackle is a little unfair, because whilst these songs are performed and executed as if they’re constantly on the verge of a breakdown, on this evidence, Royal Trux have that kind of weird psychic connection that bands acquire after years of playing with each other. The songs on Platinum Tips might be unrehearsed, but there’s most certainly a hive mind occurring here. It’s perhaps most evident on the wonky jam of Blue Is The Frequency. Here, it’s a far rougher beast than the version that adorned 1999’s Veterans Of Disorder and hurtles headlong into a long drawn out exposition that sounds not unlike Led Zeppelin at their most indulgent and stoned.

The long corridors of chaos of Blue Is The Frequency lead into the echoing caverns of closing track Ice Cream, a song that is admirable in its restraint, allowing Herrema to croon over a shape shifting, time bending, abstract jam all of which points to a band that is comfortable with each other. So whilst the connection is most definitely there with Hagerty and Herrema, they’ve clearly picked their band well with drummer Tim Barnes and bassist Brian McKinley fitting in perfectly.

It’s not all long drawn out space rock jamming sessions however, there’s plenty of scuzzy, filthy rock tunes too. It on the likes of Junkie Nurse (a hybrid of Velvets and The Stooges at their filthiest), Sewers of Mars (something akin to Creedence Clearwater Revival pulled through a brown river rather than a green one), that the band’s lack of rehearsal plays to their advantage. There’s an edge to these performances that couldn’t have come from a more rehearsed band. Slightly fudged lyrics, instruments not turned on, and a palpable sense excitement give every single one of these songs a sense of electricity and vibrancy.

Even when it sounds as if the band are about to fall apart completely, they seem to improvise their way out of a hole. Red Tiger sounds a little apprehensive at times, but even when it wanders into dead ends, it regains its composure quickly and comes roaring back to life. When they’re totally focused, such as on the ferocious Waterpark it’s hard to believe they’ve been away for the best part of 17 years. They sound so alive, which is something that given their somewhat wild youth, is a pleasure to be able to say. Hopefully some new original material will emerge in the fullness of time. As it is, this is a welcome reminder of a band that has always played by its own rules.