Röyksopp & Robyn – Do It Again

by Max Raymond
published: 20 May 2014 in Album Reviews
Tweet 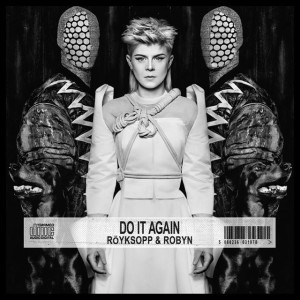 When news broke that, in addition to a tour this summer, Röyksopp and Robyn were working on new material together, it was enough to make a lot of people go weak at the knees. The Girl And The Robot was one of the standouts from Röyksopp’s 2009 album Junior, and None Of Dem was one of several crackers from Robyn’s trio of Body Talk releases. What could possibly go wrong when some of the best players of Nordic electropop team up?

With new mini-album Do It Again, they’ve confirmed how much of a dynamite pairing they can be. That said, it’s probably important to state that anyone looking for a few repeats of the melancholic euphoria of The Girl And The Robot will be bemused at first. That’s not to say it isn’t accessible – a couple of tunes are very radio friendly – but it will take a few listens to fully grasp everything. Do It Again sees them revelling in a sense of freedom. As a result, not all of their experiments work but it’s a thrilling 35 minutes nonetheless.

There are a couple of long epics that bookmark the record. The first part of Momentum is seemingly straightforward icy pop that threatens to morph into something grander, yet it stubbornly refuses to for the sake of its foreboding atmosphere, and then there’s its third act where it splinters off into free-form saxophone noodling; all of this somehow making for an entirely engrossing opener. Sadly, Inside The Idle Hour Club fails to reach the same dizzying heights. Maybe it’s because it’s the only song without Robyn herself that renders it unremarkable, but it makes for a limp finish.

In between are three vastly differing slices of electro, showing off the talents of both artists very well. Every Little Thing is a solid ballad that perhaps does the best job of their strengths into a single song. The other two tunes, however, are still absolutely brilliant and worthy additions to their respective cannons, which at this point must be bulging with gems. The title track is a thumping and anthemic – pulsing, in your face and with Robyn at the top of her game. Sayit is low on the hooks but big on a glitch-ridden atmosphere that’s as ominous as it is exhilarating.

Do It Again isn’t as downright amazing as it could have been, but there are far more pros than cons. It’s definitely self-indulgent in places, resulting in some of the most adventurous pieces of music that either artist has conjured up in their respective careers, but those moments are entirely justified. There’s just so many ideas in the heads of Röyksopp and Robyn that three minutes just doesn’t seem enough any more. Besides, a release of theirs with noble failures is still a lot better than the efforts of many of their more mainstream EDM contemporaries.