Rudimental – We The Generation 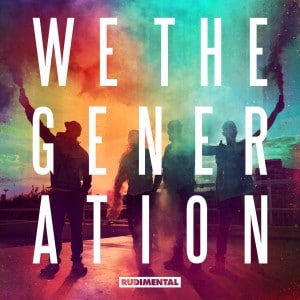 Rudimental are one of the great UK pop success stories of recent years, bringing drum and bass to a massive audience without compromising its edginess or soulful roots, and finding suitable vocalists for the fight in Ella Eyre and John Newman. Their thrilling songs have been a refreshing shot in the arm. So how to follow up Home, the record that effectively made all this possible? Do they go for more of the same or attempt to branch out further?

As it turns out, We The Generation veers towards more of the same – but feels diluted in comparison. The excitement of the beats remains, but is a more routine discipline this time around. The selection of guests makes an impressive roll call, and does concentrate on the new rather than the old, but there is a feeling we have been here before.

This is a shame, because at their best Rudimental make you want to shake all available limbs at the fastest possible speed. But the writing is often too polished, the studio edits removing a lot of appealing roughness from the edges and adding gloss finish instead, while the emotional sentiments are largely safe for daytime radio rather than dark and dingy clubs.

Love Ain’t Just A Word is a prime example; the nice dubby beat that kicks off proceedings cutting to a clean but energetic drum and bass beat before Dizzee Rascal’s cameo exhorts us to “love thy neighbour, love thy raver”. The intentions are laudable, railing against racism, but in terms of execution it proves a far cry from the sound of the police.

There are some nice production moments all the same, such as the warm keyboards washing over the breakdown of Never Let You Go, Foy Vance in control of one of the best songs here. The deeper four-to-the-floor beat of Rumour Mill is good too, with a catchy hook – but sounds more like Chromeo than Rudimental.

Ella Eyre’s contribution, Too Cool, is a highlight, one of the few moments on the album that really lets itself go. By contrast, Ed Sheeran and Lianne La Havas – though the latter is smokey in delivery – are too relaxed in style to make the transition from singers with a soulful education to the front of a band operating at twice the tempo. Meanwhile, We The Generation says “we have had enough”, but the execution of what should be confrontational lyrics sounds like a summer’s day in the park rather than a demonstration against adversity.

The most intriguing track here is the Bobby Womack collaboration New Day, which the late singer instructed the band to finish through his widow. It is an optimistic statement with which to conclude, the stripped back beats, distant organ and woozy atmospherics complementing the singer beautifully.

October seems a strange time to be releasing a record of what is essentially a collection of anthems built for summer. But that sums up Rudimental’s second album perfectly. There is nothing especially wrong with it, but it hits the middle ground all too easily, sounding like Home minus the guns-out anthems and the hands reaching for the sky.