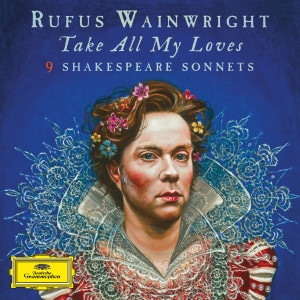 Never let it be said that Rufus Wainwright takes the more commercially palatable path. The man whose last album was a re-recording of his (rather tepidly received) opera Prima Donna is back and he’s gone all theatrical again. To celebrate Shakespeare’s 400th birthday – this album is released the day before the official anniversary – Wainwright has revisited an idea he dipped into for his All Days Are Nights: Songs For Lulu, and based an entire album on the sonnets of the Bard.

For Take All My Loves, Wainwright has teamed up again with Marius De Vries, with whom he collaborated on what remain his finest albums, Want One and Two. This will gladden the hearts of long-term fans, but they should prepare themselves for the fact that Wainwright’s lilting croon isn’t heard all that much. Instead, he’s gathered together a stellar guestlist from both the music and acting world and, in most cases, gives them the limelight instead.

As those who remember Sting‘s somewhat misguided adventures with a lute will recognise, it’s always tricky when contemporary artists take inspiration from the long-ago past. However, despite swinging close to teeth-grinding pretentiousness at times, Take All My Loves does work – just about. The format is a simple but effective one – a spoken word section with lush orchestral backing where an actor – such as frequent Wainwright guest Sian Phillips – recites Shakespeare’s words, followed by the same sonnet set to music and, usually, sung by a guest vocalist.

The Austrian soprano Anna Prohaska features most frequently on the album, kicking off proceedings with When Most I Wink (a musical version of Sonnet 43) – as impressive as her vocals are though, it’s somewhat of a dirge, and becomes a bit of a chore to sit through. Thankfully, she fares far better with A Woman’s Face (Sonnet 20) which is the most haunting and beautiful moment on the album (and also reprised rather wonderfully by Wainwright himself towards the end of the record). Famously the sonnet which raised most questions about Shakespeare’s sexuality, it’s clear to see why it’s so close to Wainwright’s heart, and it’s on tracks like this that the magic of Want is most easily recreated. It also sits far better here than on All Days Are Night.

There’s an awful lot of classical/pop crossover on Take All My Loves, which might not be to everyone’s tastes. The more conventional, ‘rocky’ side of Wainwright is well expressed on Unperfect Actor, a sweeping stomper featuring an opening monologue by Helena Bonham-Carter and backing vocals by his sister Martha. Florence Welch (described by Wainwright as a “Shakespearean character in high heels”) leaves her Machine behind to take lead vocals on When In Disgrace WIth Fortune And Men’s Eyes (Sonnet 29) and sounds surprisingly perfect for a Wainwright album: for once, she leaves the bombast behind and sounds devastatingly pretty on what is probably the album’s most dreamy moment.

There are a few moments that will raise eyebrows – William Shatner is among the names reading the sonnets, and it’s impossible to hear his voice without remembering his infamously disastrous rendition of Mr Tambourine Man, while Carrie Fisher, conversely, fares surprisingly well reading Sonnet 29. There are also times when Wainwright’s laudable ambition falls a bit flat: you can’t imagine anyone else even attempting a Kurt Weill-style eight minute long song sung entirely in German, but that’s what he does on All Dessen Müd. It’s entertaining enough, but far too long, and even die-hard Wainwright acolytes will find themselves checking the time before it’s done.

Take All My Loves will certainly leave a fair few people cold, and you get the impression that this will be a specialist listen for most, as was no doubt the intention. It’s certainly a labour of love for Wainwright, and there aren’t too many people as adept at mixing classical elements with baroque pop, even if at times the entire enterprise seems perilously close to falling on its face. Even during its more ludicrous moments, though, it’s impossible to deny the beauty that often shines through.