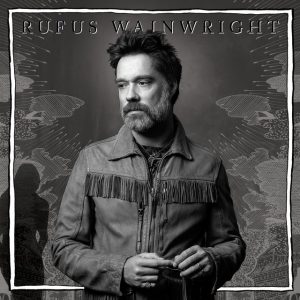 It’s been marketed as a return to form, a bookend to his debut album, and a dialled down, mature version of the luxurious baroque pop that he’s always been a master of – but Rufus Wainwright’s new album, Unfollow The Rules, is its own animal.

This is, after all, his ninth studio album, and his first of original material since the masterful Out Of The Game. As is the case with many of his previous records, Wainwright spares no expense (or maybe pulls in a few favours) in securing the talents of world-class musicians. Not one, but two, of the finest drummers in the history of recorded music appear here, in Jim Keltner and Matt Chamberlain, along with a world-class producer (Mitchell Froom takes over from Mark Ronson). Matt Chamberlain and Blake Mills (who appears here on guitar) are two of the integral players in Bob Dylan’s current band – and their steady hands are often called upon to fulfil some of Wainwright’s wildest creative ideas throughout the album. And of course the studios are all top-dollar, the label backing considerable, and expectations high. But for all this, some questions always crop up with the music of Rufus Wainwright.

What, for instance, would somebody who had never heard of him think about his music on hearing it for the first time? Would they be surprised at his golden tenor? Would they enjoy the luxurious nature of his expensive baroque pop? Would they simply not know how or where to place his unique combination of bruised melancholy and stunning melodicism? Would they (say it quietly) find it rather dull? No matter the answers to these questions, one thing is clear: Unfollow The Rules – the album title was inspired by a phrase used by Wainwright’s daughter – is worth the wait, and across the 12 songs here, we experience some of the finest moments of his career to date.

The album opens with a bluster of powerful Matt Chamberlain drumming, before we are gradually reintroduced to a tightly woven vocal chorus made up entirely of layers of Wainwright’s voice. According to the press kit and the material released in support of the album – and, indeed, the video – the track was inspired by Anna Wintour, and is the first of handful of songs on the album dedicated to, or inspired by, people who have been important to Wainwright’s life. On the track Damsel In Distress, we see a spiritual connection with Joni Mitchell – an artist who completely typifies the singer-songwriter generation that emerged from the place Wainwright now calls home: Laurel Canyon.

There’s lots of fun to be had, too. Despite Wainwright’s advancing years (he turns 47 this month) there are still youthful flourishes across the album, particularly on tracks like Early Morning Madness, which uses an aggressive, almost atonal sonic palette to frame Wainwright’s hangover narrative. Moments like this are tempered by soothing, relaxing songs that typify Wainwright’s luxurious approach to pop music – the case in point being the track Peaceful Afternoon, a delicate ballad written to show the audience how much Wainwright’s husband means to him, but also to remind himself that love and relationships are often fleeting and that no relationship survives death.

If you’re looking for a moment where Wainwright’s voice is allowed to fully showcase itself and completely demonstrate its power, the track is Only The People That Love. That voice is superb here, his supple highs and throaty mids are used to devastating effect, and the sonic canvas upon which he paints his voice is pure, and elegantly constructed.

Wainwright’s scathing attack on Donald Trump, Sword Of Damocles, is sadly not included. That track, released towards the end of 2018, is Wainwright’s most powerful artistic statement since Gay Messiah. That one gripe aside, of course this is a quality record. In fact, it’s an excellent record. Given it’s a Rufus Wainwright record, did you expect anything else?