Rufus Wainwright – Vibrate: The Best Of 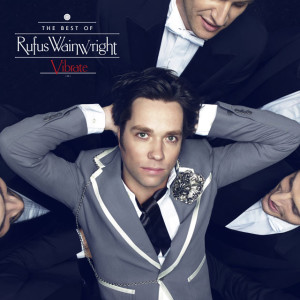 For the uninitiated, Rufus Wainwright recently turned 40. His solo career is less middle-aged – he released his eponymous debut album in 1998, but this retrospective still manages to cover nine albums and 15 years of work. Wainwright himself has said that Vibrate is “an encapsulation of my youth”, which suggests that rather than following the tried and tested formula of cashing in on an ending career with a greatest hits, he simply wants to draw a line under his output so far.

As with many compilations, Vibrate offers both a comprehensive run through of Rufus Wainwright’s work and a second disc of extra material to encourage those who already own it all to still make another purchase.

The first disc consists of 18 tracks, mainly focused on Wainwright’s earlier work. It starts with the sombre ballad Going To A Town, from 2007’s Release The Stars, but leans heavily on Want One (2003) and Want Two (2004), perhaps Wainwright’s best work. The highlight from the former is Oh What a World – a brass led pop operaetta with a upbeat philosophical lilt. Like much of his work, it sounds like it should feature on a soundtrack to a stage production rather than a standard album.

As does The One You Love from Want Two. Wainwright channels his inner Thom Yorke on the chorus, a slightly creepy refrain over minor keys. Less creepy is his version of Jeff Buckley’s Hallelujah from the Shrek soundtrack, which is slightly quicker than the original and significantly less poignant.

Disc one also features a brand new song, Me And Liza, which was co-written with Guy Chambers. The track is about Wainwright’s relationship with Liza Minelli, famously fractured by his 2006 tribute concerts to her mother, Judy Garland. It is a classic, pointed and above all fun track that fans will love.

The second disc, for those with pockets deep enough to purchase the deluxe edition, has plenty more to keep even the most devout Rufus Wainwright fan interested. It features some of the oddities of his career including The Maker Makes, his piano ballad from the Brokeback Mountain soundtrack, a cover of Across The Universe that once appeared as a bonus track on 2003’s Poses, as well as La Complainte De La Butte, sung half in French, from the Moulin Rouge soundtrack.

WW111 (World War Three) is also here, not a new song, but one that has never been on a Rufus Wainwright release before. That is a shame, because it is something of a lost classic with a brilliant Wainwrightian refrain of “Don’t bore us, get to the chorus” over tinkling piano. This track was also co-written with Guy Chambers.

Wainwright also gives a nod to his musical heritage with a cover of One Man Guy by his father Loudon Wainwright III (which also featured in Brokeback Mountain), as well as tracks from his tribute show to Judy Garland, in this case recorded at Kenwood House in London. The Garland tribute extends to three live tracks.

Perhaps it is fitting that Vibrate ends with an excerpt of an interview of Wainwright with Jo Whiley, recorded in 2011 where he claims his success is down to a good amount of preparation, rest and insanity. What Vibrate shows is that Wainwright is an extremely versatile and interesting artist, who will no doubt expand on this collection in the years to come.