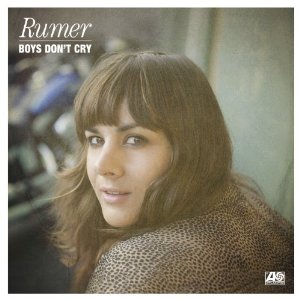 Rumer has it that Adele is unbothered by Rumer. There you go. There’s the obligatory comparison of one female artist to another. Because that’s how it works, right? Men stand alone but women are just in one big pile of hair extensions and hot pants. Adele is fighting on the same battleground as Rihanna, a place where tits are more explosive and vital than mortars. Only, that’s a crock isn’t it?

In this case, on this day, in this little avalanche of syllables, we’re addressing Rumer on her merits and on this record. Not on how it relates to her last or the expectations the press placed on her as the next-INSERT NAME OF HIGHLY HYPED SOUL SINGER TYPE. Because, here’s a person who made a record. And it’s a record of cover songs. So there’s lots of half-baked psychoanalysis to be done.

With that preamble kicked into the long grass, together with our sense of decency and hopes of ever being paid decent wages, let’s talk Rumer and her new record, Boys Don’t Cry. Remember that title, from when Robert Smith had eaten a few less pies and looked a whole lot more acceptable in eyeliner? Well, this record has the grand total of toss all to do with The Cure. It casts its eye a whole decade earlier to dredge the rich molasses of ’70s rock.

This is Rumer pulling a move already mastered by Tori Amos on Strange Little Girls. But where Ms Amos pulled a grab bag of songs from rock history to do the gender switcharoo with, Rumer has taken liberally from soul, reggae and southern rock. Each and every song was made famous by a man but, as befits a woman with such a seriously great voice, Rumer nails them. The problem is: why?

Rumer is 32 years old. On her website you’ll find an interview with her having a chin stroking competition with ‘Whispering’ Bob Harris. Boys Don’t Cry is her second record. Again: her second record! A covers album as a second record is a depressing move.

Rumer wrote or co-wrote all but one of the songs on her debut album, Seasons Of My Soul. It was an extremely accomplished bit of work. It had some really good songs on it. Good is the adjective though. Not great. Not killer. Not Someone Like You good – sorry, unfair comparison there, but an apt one. Because first albums are about making a mark, but second albums should be breakthroughs; they should show development.

Boys Don’t Cry is a very capable album. You’ll like it if you like Jimmy Webb, Isaac Hayes, Bob Marley Townes Van Zandt and… um… Gilbert O Sullivan. (Poor old Gilb, he was on the radio recently saying we don’t respect him. He did write good songs. He’s just…a whiner.) But this is a milk sop to blandness. Predictable. It’ll make Bob Harris tumescent. But Rumer could be doing so much more.

Rumer picked these songs, no doubt. But Boys Don’t Cry isn’t the second album we hoped for from such a talent. It’s just passable. It’s Tesco shelf filler, it’s Father’s Day fodder, it’s the stack of cover versions every lazy advertising executive is craving now that Please, Please, Please Let Me Get What I Want is all played out. Rumer has it, but this, well, this isn’t it.