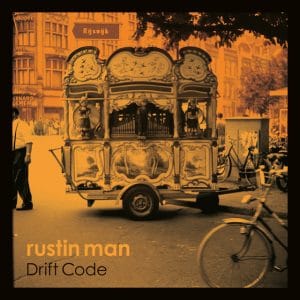 There is something very refreshing about the pace of life in Paul Webb’s musical world. Inhabiting the spirit of his former band, the ex-Talk Talk bassist has surfaced with his first album as Rustin Man since the Out Of Season collaboration with Beth Gibbons in 2002.

Typically he has been investing in Drift Code all that time, recording the album in splendid isolation in a converted barn in Essex. The isolated location runs through the record, as does a feeling of belonging, and – contrarily – a sinister undertone. It is as though in spite of his relative contentment, Webb encounters some spooks on the journey from house to barn.

He plays almost all the instruments himself, recording each in a different location of the studio to give the stereo listener the illusion of a full band. The orchestrations are imaginative, colourful and above all meaningful. They give the music its luminosity, redolent of the unhurried work on the best Talk Talk songs, where the mood is set out in natural, instinctive manner. The light and shade are beautifully rendered, as though trees outside the studio are casting their indiscriminate shadows around Webb’s work.

The only possible issue to complete enjoyment of this record is the voice itself, which is likely to be a divisive factor. There is no doubt that Webb sings directly from the heart, with a poise that on occasion recalls Next Day-era David Bowie. When multi-tracked however the voice can be cloying, and on certain phrases the mood can be misread. “It feels so good to be alive,” Webb sings in the rich opener Vanishing Heart, like his life depends on it – yet when he sings ‘now the trees are rushing by’ in Judgement Train, there is an awkwardness to his delivery that doesn’t quite ring true, despite the vividly descriptive music round about. Similarly in the centre of Light The Light the thick vocal timbre clogs the words rather.

Musically, Drift Code feels like a study in time travel, taking time to look back through cracked lenses at the 1940s, where initially all seems well with the world. The spooky undertone remains, however, channelled into the room through touches of orchestration that reveal these eyes have been further than they first appear. They are fully explored in the spooky interlude Euphonium Dream, displacing the stereo picture. Light The Light, which has an endearing, stumbling gait from its piano riff, is like a descriptive accompaniment to a silent film before the other instruments arrive, while Martian Garden also feels like woozy recollection of times past.

At times there is music of heart stopping beauty. During the vocalise of Brings Me Joy the eyes well up and the fragility of Webb’s soul can be glimpsed. The rousing trombone parps and euphoric chorus of Our Tomorrows make a strong impression too, but even here there are a few shadows.

Drift Code is a record of many musical and emotional layers, befitting a record 17 years in the forming. Webb has clearly spent a lot of time with it and moulded it into a musical representation of himself – happy, yes, but with a few demons at the corners of the mind. Because of that it is a very human experience, and if you can work past the occasional awkwardness of the vocal by spending more time with it then listening treasures await.